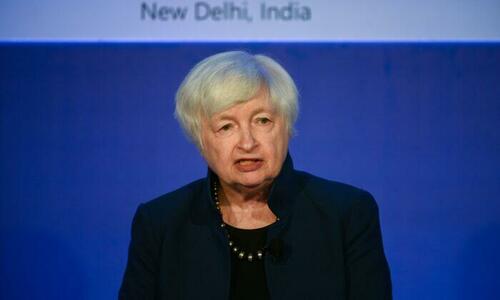 Authored by Thomas McArdle via The Epoch Times,

Treasury Secretary Janet Yellen, who last year assured the nation that inflation was only a fleeting bogeyman, recently took to the pages of the Wall Street Journal to sell the Biden snake oil of a U.S. economy that we are supposed to believe is “resilient,” “strong,” “healthy,” and “robust” thanks to this administration’s endless inflationary spending, because of which she claims “the U.S. will be in a uniquely strong position to capitalize on the future.”

Funny, but just a few days before her overflowingly optimistic op-ed, Yellen was telling CBS’s 60 Minutes “there’s a risk of a recession,” then craftily adding that “it certainly isn’t, in my view, something that is necessary to bring inflation down”—a suggestion that the aggressive but less-than-Volckeresque higher interest rate policy of the Federal Reserve she once chaired will be to blame for the downturn that likely has already begun.

Before that, early this month, Yellen appeared on the Stephen Colbert show and blamed the American people for the record-high inflation, because they “suddenly started splurging on goods, buying technology,” leading to “bottlenecks” in supply chains.

Only last June before the Senate Finance Committee, Biden’s Treasury chief was saying, “I do expect inflation to remain high,” conceding that the administration’s 4.7 percent forecast would have to be revised in the midst of a 40-year high 8 percent inflation rate and a World Bank projection of several years of high inflation and seriously diminished economic growth around the globe. Now, by contrast, she claims “there are signs that the supply-demand imbalances that have been boosting inflation are now easing in many sectors of the economy.”

So when Republicans like Sen. Tom Cotton of Arkansas and Rep. Mike Gallagher of Wisconsin try to alert the administration to the Chinese Communist Party seeking control of an important Silicon Valley company like GEO Semiconductor, they have to wonder whether it will be Janet in Wonderland they’ll be dealing with or the woman who appears not to have swallowed the totality of the Biden propaganda whole.

“As you know,” the two members of Congress wrote Yellen last week (pdf), “the CCP pursues a strategy to acquire cutting-edge dual-use technology overseas in part to help the People’s Liberation Army (PLA) develop and field advanced military capabilities that are then aimed at American forces in the Indo-Pacific. We are deeply concerned that GEO Semiconductor may fall prey to this scheme, as Chinese-controlled companies are often forced to hand over their technology to the Chinese military or intelligence services.”

In a taunt regarding the Democrats’ spending excess, Cotton and Gallagher added that “Given that Congress recently enacted legislation to spend billions to promote the American semiconductor industry, it would be malfeasant to allow the Chinese Communist Party to become a beneficiary of American taxpayer dollars and to seize part of that industry.”

But considering that last month Yellen said, “it’s appropriate for American businesses to be thinking about” China conquering Taiwan, how much action can be expected from her Treasury against Beijing’s infiltration of American high tech?

President Joe Biden’s main response to the China threat is—is it any surprise?—to establish a new layer of bureaucracy at the State Department that Democrat elder statesman Leon Panetta fears could become “another bureaucratic hellhole in which people establish positions for the sake of establishing positions and don’t develop the kind of sharpness that you need in order to get the job done.”

Yellen claimed in the Wall Street Journal that “the policies of the Biden administration have propelled the American economy to one of the fastest recoveries in modern history.” Sorry, but the economic growth that returned when Americans came back to work after the COVID-19 lockdown is not the result of Biden policies, any more than COVID was the result of Donald Trump’s pro-growth economic policies.

The fact that Yellen would make this assertion demonstrates just how dumb she and the president think Americans are.

Like other Federal Reserve chairmen before and since, Yellen spent years watching her words and maintaining an image of detachment from politics and ideology. Her contradictory assertions and discredited predictions during her time as Treasury chief have ruined her reputation of supposed sagacity.