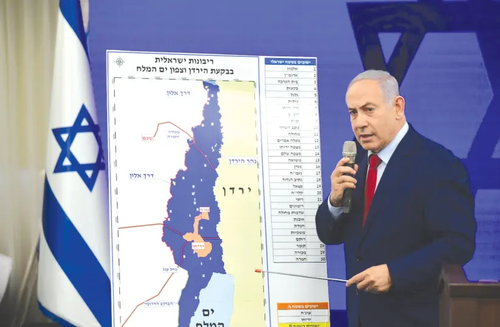 Incoming Israeli Prime Minister Benjamin Netanyahu is busy forming what’s being widely perceived as the most hardline and right-wing government in the country’s history. Netanyahu is set to be formally sworn into office on Thursday, along with his top ministers.

He has already promised to put settlement expansion in the Palestinian West Bank highest on the list of priorities. His Likud party released the new governing coalition’s policy guidelines Wednesday, which opens by vowing to “advance and develop settlement in all parts of the land of Israel – in the Galilee, Negev, Golan Heights, and Judea and Samaria.”

All of these are the biblical and Israeli-recognized names for broad swathes of the occupied West Bank. The new government is essentially warning it will go ‘gloves-off’ in taking more territory.

Given that the United States and the vast majority of United Nations members oppose an official policy of Israeli West Bank expansion, also given the potential for reigniting explosive conflict in the region, it could see a strained relationship between the Biden administration and the Netanyahu government.

Already some 500,000 Israelis are part of dozens of Jewish settlements scattered throughout the West Bank, which European leaders especially have long condemned as “illegal”.

These settler groups frequently clash with local Palestinians – the latter who number about 2.5 million, but who have growing restrictions placed on their freedom of movement as the settlements expand. Israeli troops control checkpoints and Palestinians’ ability to travel depending on the proximity of Jewish settlements.

Some of the incoming government officials under Netanyahu themselves live in ‘illegal’ settlements, as Al Jazeera explains:

Netanyahu’s new government – the most religious and hardline in Israel’s history – is made up of ultra-Orthodox parties, a far-right ultranationalist religious faction and his Likud party. It is expected to be sworn in on Thursday.

Several of Netanyahu’s key allies, including most of the Religious Zionism party, are ultranationalist West Bank settlers.

Netanyahu was removed from office last year over major accusations of corruption and bribery, the investigation of which is still ongoing. He served as prime minister from 2009 to 2021 – and his now rising to lead an unlikely coalition that finally emerged victorious after multiple failed national election attempts. This of course makes him the longest-serving leader in Israel’s history.