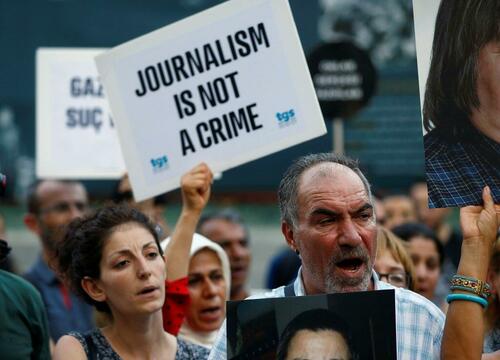 The number of journalists imprisoned worldwide has hit a new record at 533, according to an annual report by press fredom watchdog, Reporters Without Borders.

Demonstrators shout slogans during a protest against the arrest of three prominent activists for press freedom, in central Istanbul,Turkey, June 21, 2016. REUTERS/Osman Orsal

The total number is up from 2021, when 488 journalists were imprisoned, according to the RSF’s Annual Press Freedom Review published last week.

“More than a quarter of them were imprisoned during the year,” according to the Paris-based watchdog which has kept records on imprisoned reporters since 1995.

More than half of those jailed are in five countries; China (110), Myanmar (62), Iran (47) Vietnam (39) and Belarus (31) – with 32 of the 47 in Iran having been arrested since protests broke out in September over the death of Masha Amini, a 22-year-old woman who died in police custody while breaching the country’s strict dress code.

Of the imprisoned, just over 1/3 have actually been convicted of a crime, while the remaining 2/3 are being held without trial.

“Some of them have been waiting for their trial for more than 20 years,” said the RSF.

In Myanmar, to be a journalist is “effectively a criminal offense” since the 2021 military coup, which led to the roundup and imprisonment of 62 journalists.

“Dictatorial and authoritarian regimes are filling their prisons faster than ever by jailing journalists,” said RSF secretary-general, Christophe Deloire in a statment.

What’s more, in the past two years, 57 journalists have been killed – eight reporting on the war in Ukraine, and five of them from non-combatant countries.

According to the RSF, almost 80% of media professionals killed around the world were “deliberately targeted in connection with their work or the stories they were covering,” such as coverage of corruption or organized crime, Quatari government-owned Al Jazeera reports.

The number of female journalists in prison is also at an all-time high worldwide, rising from 60 to 78 since 2021, largely due to greater numbers entering the profession.

The NGO awarded its Prize for Courage on Monday to Iranian journalist Narges Mohammadi, who has been repeatedly imprisoned over the past decade.

Three-quarters of jailed journalists are concentrated in Asia and the Middle East, said the RSF.

According to Deloire, the new record “confirms the pressing and urgent need to resist these unscrupulous governments and to extend our active solidarity to all those who embody the ideal of journalistic freedom, independence and pluralism.”