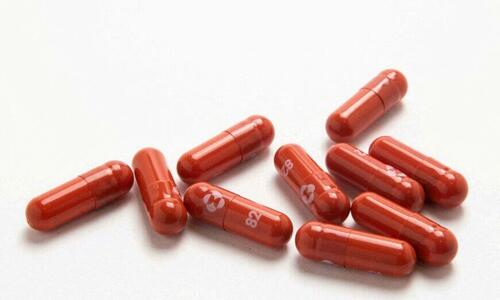 The COVID-19 antiviral drug Molnupiravir helps speed up recovery from the virus but does not reduce the hospitalization or death rate in higher-risk vaccinated adults, a new study has found.

Molnupiravir, from Ridgeback Biotherapeutics and Merck & Co. is used to treat mild to moderate COVID-19 and can be taken at home, twice a day for five days, within five days of symptoms onset.

It works by stopping the virus from replicating, keeping levels low in the body, thus reducing its severity.

The study was published in The Lancet on Dec. 22 and has been peer reviewed.

Between Dec. 8, 2021 and April 27, 2022, more than 25,700 eligible participants in the UK aged 50 or older—or 18 or older with relevant comorbidities—who had been unwell with confirmed COVID-19 for five days or less took part in the study, which was conducted when the Omicron variant was dominant.

The mean age of participants was 56.6 years and 94 percent had received at least three doses of a SARS-CoV-2 vaccine.

Nurses changing their PPE on Ward 5, a COVID Red Ward, at the Royal Alexandra Hospital in Paisley, Scotland, on Jan.27, 2021. (Jane Barlow/PA)

Participants who received Molnupiravir reported a median recovery time of nine days compared with 15 days for those only receiving usual care, the study found, with researchers stating that further analysis suggested that Molnupiravir sped up recovery by 4.2 days on average.

“This analysis of the largest randomized trial involving people vaccinated against SARS-CoV-2 infection who are at increased risk of adverse outcomes in the community and unwell with COVID-19 showed that the early addition of Molnupiravir to usual care did not reduce hospital admissions or death (which were low in both treatment groups),” the study authors noted.

“However, participants in the Molnupiravir plus usual care group recovered faster than those in the usual care group, had a higher rate of early sustained recovery, and had fewer general practitioner consultations,” they added.

Molnupiravir, an experimental COVID-19 treatment pill, is seen in this handout photo released by Merck & Co. Inc. on May 17, 2021. (Merck & Co. Inc./Handout via Reuters)

In November 2021, Merck said results of its MOVe-OUT study of Molnupiravir showed that the oral antiviral medicine was 30 percent effective in reducing hospitalizations. However, that study was conducted among unvaccinated adults.

Shortly after, the UK became the first country to approve Molnupiravir for the treatment of mild to moderate COVID-19 in those with other risk factors, such as obesity, diabetes, or those over 60 years old.

The National Institute for Health and Care Excellence (NICE), which provides national guidance and advice to improve health and social care in the UK, has recommended individuals stop using five COVID-19 treatments, including Merck’s antiviral pill, to treat the virus, stating that “while there is some clinical evidence that they are effective at treating COVID-19 they were not found to be cost-effective.”

Chris Butler, professor of primary care in the Nuffield Department of Primary Care Health Sciences at Oxford University and co-chief investigator, said at a Science Media Centre briefing following the publication of the study that the results indicate that Molnupiravir could help ease the burden of UK health services which are under pressure and could also be used to help get key workers back to work quicker, as it aids with speeding up recovery from COVID-19.

However, Richard Hobbs, Nuffield professor of primary care at Oxford and co-investigator, noted the high price associated with the antiviral drug, which is estimated to cost several hundred pounds for a five-day course.

“Molnupiravir is a high-cost antiviral. Its deployment will depend on how much a mean four days’ improvement in symptoms will benefit the country,” Hobbs told the briefing.

Molnupiravir made nearly $5 billion in sales for Merck in the first three quarters of 2022.