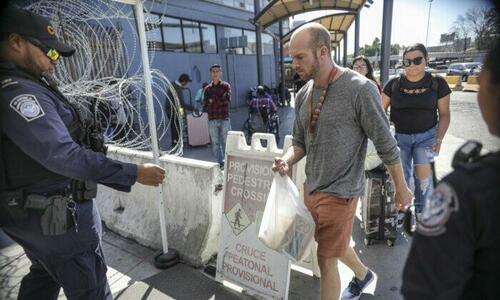 Authored by Mark Tapscott via The Epoch Times,

Immigration and Customs Enforcement (ICE) officials are unable to locate any records of illegal immigrants taken into custody and placed in a federal program to “ensure non-detained non-citizen compliance with release conditions, court hearings, and final orders of removal,” according to a nonprofit government transparency advocacy group.

The ICE letter cautioned that the failure to locate records sought by TRAC isn’t evidence that the documents do or don’t exist. The inability of ICE to locate the requested records was described by TRAC in a Dec. 23 statement as a “very troubling development.”

Nearly 378,000 individuals are currently covered by the program, according to federal officials.

The ICE letter was in response to TRAC’s Freedom of Information Act (FOIA) request for “the latest alien-by-alien, anonymous data covering all individuals who were taken into custody by ICE and entered (or transferred to) ICE ATD custody from the beginning of Fiscal Year 2019 through August 2022 (or date of search, whichever later).”

Individuals who fail to report “are subject to arrest and potential removal. To be eligible for ATD, noncitizens must be 18 years of age or older, effectively removable from the United States, and in some stage of the immigration process,” according to ICE.

“According to ICE’s posted numbers, persons being monitored by its Alternatives to Detention (ATD) program grew by 20,000 in just the last two weeks to a total of 377,980 individuals,” TRAC said in its statement.

“However, TRAC is still urging caution in interpreting these latest numbers. As we announced earlier, ICE has informed TRAC that Alternatives to Detention (ATD) data the agency posted previously was inaccurate. TRAC has requested but not yet received underlying source documents from ICE. Thus, it has not yet been able to validate and correct the ICE ATD data being posted.”

The Epoch Times has requested comment from an ICE spokesman regarding the fact that the agency appears to be telling TRAC that it’s unable to locate data, even as the government publicly reports what it presents as accurate information.

Questions about the accuracy of government immigration data come as the country approaches a third consecutive year of what’s expected to be record totals of illegal immigrants crossing into the United States at the southern border with Mexico.

Since President Joe Biden took office on Jan. 20, 2021, more than 2 million illegal immigrants are known to have entered the country, as well as hundreds of thousands of “gotaways,” who are individuals pursued by border officials but not apprehended.

Illegal immigration surged to record levels following Biden’s inauguration and decisions shortly thereafter to repeal the tight enforcement policies of his predecessor, President Donald Trump, especially the “Remain in Mexico” program that required staying in Mexico while awaiting disposition of asylum requests and other legal matters.

Earlier this month, TRAC announced that “the data ICE has been posting for months showed that use of GPS ankle monitors had been increasing, which TRAC previously reported. ICE now reports this is incorrect, that ankle monitor usage is in fact, down significantly. Adding to the confusion, ICE frequently posts data, replaces it, and replaces it again without any indication that changes have taken place, or which set are the ‘correct’ numbers.”

But the problems uncovered by TRAC with the ICE data are more extensive than the flaws regarding ankle monitor usage, according to the transparency group:

“ICE data reporting problems extend beyond the GPS ankle monitor usage. ICE’s new data for FY 2022 significantly revised the previous numbers for every single one of the ATD reported technologies—not only GPS, but also SmartLINK, and VoiceID, as well. Not only did the use of GPS monitors drop, but the public now learned that 1 in 9 (11 percent) were not being monitored with the use of any technology at all!”

“It’s a really straightforward example of a lack of transparency and compliance with the disclosure requirements of the FOIA,” TRAC co-founder Susan Long told The Epoch Times in a telephone interview on Dec. 26.

“To say there are no records, this is classic ICE. They have in the past after long delays and redactions released some updated data, but it is not uncommon to get this kind of response. Clearly, the data exists, their contracts require the information be kept and that ICE have access to it,” Long said.

As an example of problems created by the inability to verify the underlying data for immigration data, Long said ICE officials were “very embarrassed because their data was showing that the use of these ankle monitors, GPS monitors, were increasing when that was exactly the opposite of what the head of the agency was saying.”

Long stressed that she is confident that the underlying data behind the numbers published by ICE is credible.

“But if you look at the posted data at some of the links we’ve published is just unbelievably bad,” she said.

Long also pointed out that ICE publishes its data on immigration programs such as ATD because of a congressional mandate.