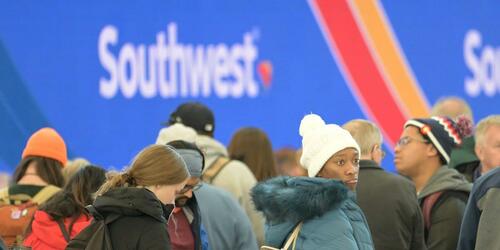 Southwest Airlines canceled nearly 3,000 flights on Monday, as a historic winter storm and inadequate staffing made for a perfect storm of holiday chaos the day after Christmas.

As of 9PM on Monday, Southwest had canceled 2,882 flights – or 70% of its schedule, according to flightaware.com. Overall, 82% of Southwest flights were either canceled or delayed. By airport, Denver International saw 24% of flights canceled, while 29% were delayed.

Tomorrow is also slated to be a total mess, with over 2,400 Tuesday flights canceled.

Is it time for @USDOT to require Southwest the ability to rebook on other airlines during IROPS?

.@SouthwestAir has now canceled 60% of their operation tomorrow, Dec. 27.

Today, Dec. 26, they have canceled 70% of their operation, and that number is increasing. https://t.co/TLaJRmE2NU

@cbschicago @nbcchicago @ABC7Chicago @fox32news What is happening with Southwest at MDW? Cancelled flights for no flight staff, no customer service, exorbitant wait times on hold, people stranded, how are people getting their baggage from cancelled flights? Insanity. pic.twitter.com/KVPiIIFy9x

A Southwest official, Chris Perry, told NPR that the disruptions are a result of the ongoing winter storm, and that the company “stabilize and improve its operation” as the weather improves.

“I’m okay with these travel situations and fly on by myself when it’s just me, but when my one-year-old has to suffer through it because of ineptitude and mismanagement, that becomes personal,” said Southwest passenger Joshua Caudle, adding “I’m never going to do this with that company again.”

James Baker, a #Southwest passenger, was flying from Sacramento to Buffalo for Christmas. His Buffalo flight ended up being canceled. Now he’s trying to get back home, but has been stuck in Denver for days. @DenverChannel pic.twitter.com/8a9RIE85uD

Other problems include “connecting flight crews to their schedules,” according to Perry, who who said this has made it difficult for employees to participate in crew scheduling services and get reassignments.

A Southwest passenger who says she was attempting to fly from Missouri to Denver said she missed spending Christmas with her family after several delays and cancellations to flights out of the Kansas City International Airport. Despite her being grounded, her luggage was sent to Denver without her, she wrote on Twitter. -NPR

“This is really as bad as it gets for an airline,” said Kyle Potter, executive editor of Thrifty Traveler, calling it a “full-blown meltdown.”

“We’ve seen this again and again over the course of the last year or so, when airlines really just struggle especially after a storm, but there’s pretty clear skies across the country.”

Still stranded at the Vegas airport (24+ hrs, multiple canceled flights) This is the @SouthwestAir rebooking line. It wraps around and then goes all the way to the end of the room. It also doesn’t move #Southwest #southweststolechristmas #southwestAir pic.twitter.com/OmCCuqLRn9