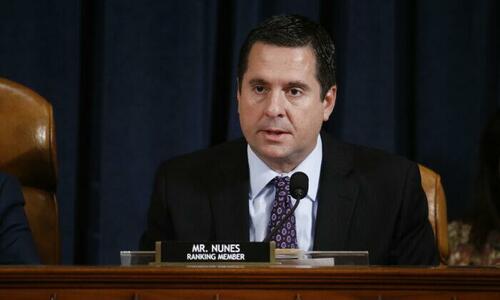 Authored by Katie Spence via The Epoch Times (emphasis ours),

Devin Nunes subpoenaed the DOJ and FBI for documents related to their involvement with the Russia collusion hoax when he was a congressman and chair of the House Intelligence Committee. In response, the DOJ engaged in “reverse spying” to try and stop the investigation, Nunes alleged in an interview that aired on Newsmakers by NTD and The Epoch Times on Dec. 21.

“It’s all common knowledge now that the FBI, DOJ, the Democrat National Party, they were all in cahoots together, taking made-up, phony dirt and taking it before a FISA court,” said Nunes, who was chair of the intelligence committee from 2015–2019.

But, at the time, the general public didn’t know about that collusion.

“At that time, nobody knew that publicly. We knew that. The FBI and the DOJ knew that we knew that. They knew that they were under investigation by [Nunes’ team]. So, what do they do? … They target my lawyers so they can try and figure out what we knew, when we knew it, and what we were going to do with the information.”

Nunes stated that to suppress the investigation, the FBI and the DOJ purposefully tried to find “blackmail” to use against Nunes’ staff.

“It wasn’t like they were in search of some crime. What they were really after was intelligence, and potentially blackmail, to figure out how they could stop the information,” Nunes alleged.

But ultimately, the DOJ’s reverse spying was unsuccessful, Nunes stated, and he was able to openly shed light on the cooperation between the DOJ, the FBI, and the Democrat National Party to bring down then-President Donald Trump.

Newspaper front pages on display at the Newseum in Washington on March 23, 2019. (Alex Brandon/AP Photo)

According to Nunes, if the DOJ was acting in compliance with the law, it should have informed Nunes when it demanded Google turn over personal email and phone data from at least two senior intelligence members of Nunes’ team. Nunes specified that the team members were working on the congressional probe into the Russia hoax.

“Look, it’s a serious issue if I’ve got staff that work for me that are handling the nation’s highest secrets. If I have staff that are somehow doing something wrong, [the DOJ] should have come to me and told me.”

Nunes said that the only way for the DOJ to get around that requirement is to use the National Security Division and “essentially accuse” Nunes and his team of being “agents of Putin.”

“There’s no other way around [informing me]. They have a duty and a responsibility if there are staffers that are involved in some shenanigans or nefarious activity, they should have come to me immediately,” Nunes states.

But, Nunes said, the DOJ never informed him of a potential issue with his staffers. And the reason is the DOJ was acting outside of a “valid predicate” and instead acting on a “lie.” Nunes stated unequivocally that there was never evidence to suggest that his staff were Russian agents.

As such, Nunes claimed, there are only two possible reasons for the subpoenas against Nunes’ staff.

“The only two logical reasons: They were there to grab intelligence on us as we were conducting our investigation, and two, to look for anything they could possibly do to find blackmail so they could stop this information from coming out and their involvement from coming out.”