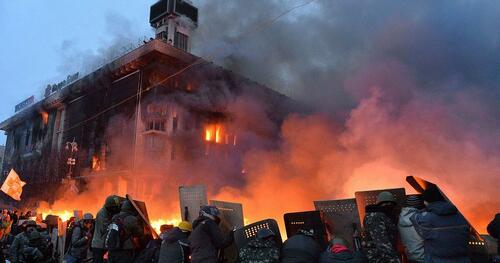 If the “Ukrainian narrative” was not ugly enough, it continues to work its way farther to the dark-side. It is debatable how long the American people will buy the line that funding the war in Ukraine will result in a good outcome. Someday, what is happening in Ukraine may be looked back upon as a horrible blunder, lie, and misstep largely orchestrated by America and the “Obama/Biden political machine.”

Sadly, US senator Bernie Sanders on Tuesday agreed, due to fairly intense pressure from the White House, to withdraw the so-called ‘Yemen War Powers’ resolution from a vote in the Senate. The crucial bill would have restricted US military involvement in war-torn Yemen and reasserted Congress’ war-making authority. As a footnote, the word was put out that President Joe Biden would most likely veto the bill passed if it passed. White House officials said the bill “could complicate the effort to back Ukraine in its war against Russia.”

Recently, in a phone call, Ukrainian President Volodymyr Zelensky “thanked” President Joe Biden for the “unprecedented defense and financial assistance that the U.S. provides to Ukraine.” that of course did not stop him from asking for billions more. So far the total that has been either proposed, pledged, or enacted exceeds a mind-boggling $100 billion. With every billion dollars representing roughly three dollars for every man woman and child in America, this means it has already cost each of us around 300 dollars. When you consider how many people, such as children and those barely getting by don’t share in this burden, the amount placed upon each taxpayer soars. Much of this money has been doled out with little oversight.

It is important to remember that under Biden’s tutelage this “conflict” has become not so much about defending Ukraine but ending Putin and Russia. It is not about the people of Ukraine but much more. The Ukrainian people and much of Europe have become mere pawns in a game. Unfortunately for the Biden camp, for all the money being poured into this “theater” it would be naive to think Putin will not achieve his goals or come out of this conflict the victor.

Even as this is being written, Ukraine is bracing for yet more Russian attacks on its energy infrastructure. Ukraine has accused Moscow of intentionally unleashing additional suffering on the population headed into Christmas. Its Prime Minister Denys Shmyhal said, “Russian terrorists will do everything to leave Ukrainians without electricity for the New Year.” Currently, around 80% of the Kiev area appears to be without electricity for the second day in a row.

The only thing growing as fast as the cost of Biden’s proxy war is the ego of Ukraine’s President Zelensky. This has become more apparent by the day as the attention-seeking comedian media star turned politician pushes his way onto the center of the world stage. Zelensky is constantly appearing at major public events to make appeals for aid. These include the Grammys and Cannes Film Festival. This is when he’s not busy addressing the G7, the European Parliament, or an UN-sponsored event.

Pro-war advocates even arranged for Zelensky to give a 30-minute long speech before Congress, foreign leaders seldom get this opportunity. During the speech, he was frequently interrupted by spontaneous standing rounds of applause from US lawmakers as he vowed: “absolute victory“ over Russia. With events like this taking place, it is little wonder Time magazine recently named Zelensky and The Spirit Of Ukraine as person of the year. There are, however, signs global audiences are tired of hearing Ukraine’s President Zelensky ask for more money. His message is steeped in propaganda. This could be the chief reason the formal request for Zelensky to talk about “world peace” before the kickoff to the World Cup final, was recently denied.

The Biden administration along with Ukrainian officials have been shocking the world with claims of how well things are going on the battlefield.” This has gone to the point where NBC News reports that the White House now calculates that the Ukrainian armed forces are capable of retaking the Crimean Peninsula. Administration officials are using this as a reason Congress still needs to fund Ukraine. Those promoting and encouraging such an offensive move ignore the danger it may cross Moscow’s “red lines” and increase the possibility of nuclear weapons being used.

Still, with many Americans distracted by the holidays, few are paying attention to just how much money we are spending supporting Ukraine. The visual aid above helps clarify the distinction between what has been proposed and enacted. The additional “proposed” billions that are shown in the above chart have at this point been approved with the recent passage of the National Defense Authorization Act for Fiscal Year 2023. Approving the current request would bring the total amount approved to $104 billion in less than a year.

To the chagrin of many Americans, the war in Ukraine continues to grind on. The ramifications of the Biden proxy war extend far past spending. It includes using presidential draw-down authority to pull hundreds of millions in weapons and anti-air missile systems from American stockpiles. Biden’s newly announced pledge to send Patriot missiles to Ukraine means we may be short weapons if a problem comes up somewhere else.

This is why NATO Secretary-General Jens Stoltenberg commenting on the state of Russia-West relations said “Even if the fighting ends, we will not return to some kind of normal, friendly, relationship with Russia. Trust has been destroyed.” He claimed that NATO sought to build positive relations with Russia immediately after the Cold War – despite the fact it expanded to Russia’s doorstep soon after the collapse of the Soviet Union.

For now, the idea this conflict will rapidly end has been placed on the back burner. This could be because many people are benefiting from the spending. To the warmongers, this is because we have not done enough. Those of us advocating the antiwar position view this as an unnecessary proxy war and that we have no business there. This extends to the position we should do everything we can to bring hostilities to an end.

Some of us take the position that this was all set in motion by the U.S. choreographed coup in Kiev eight years ago under the Obama Administration. It would be hard to overstate the significance those events played in creating the situation currently before us. Former US Secretary of State Henry Kissinger is one of those calling for urgently finding a path of negotiated settlement to the war in Ukraine. He warns the entire world is in danger as nuclear-armed superpowers inch closer to a disastrous confrontation.

A huge factor in keeping truthful information about what is happening is held hostage by propaganda. The situation on the ground in Ukraine may be far different than we in America are being led to believe. Recently the Russians have altered their strategy in reaction to reality but not because they are in dire straits. An argument can be made that Russia’s pullback from some Ukrainian territory was strategic and that by pulling back they have sucked the Ukrainian troops into a meat grinder where they have suffered massive casualties.

Michael Vlahos and Douglas Magcregor got together recently in the library of the Army-Navy Club, Washington, D.C., to reflect on the war in Ukraine;

It appears Putin has been to the front to confirm that Russian troops are prepared for a winter offensive. This is the type of warfare in which Russia excels. When it comes to fighting on the ground in cold weather, it has been said that Russia invented winter. It certainly does not look like a pleasant winter for the people of Ukraine, and for that, they can thank Biden.