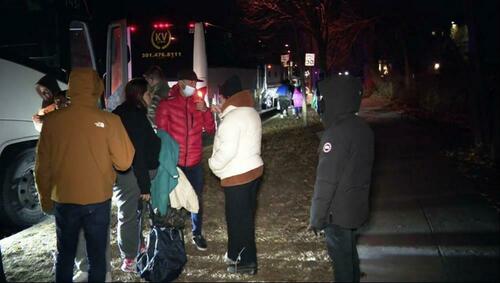 Three buses full of recently apprehended illegal immigrants were dropped off near the home of Vice President Kamala Harris on Christmas eve.

While Texas authorities have not confirmed whether they’re behind it, the dropoffs “are in line with previous actions by border-state governors calling attention to the Biden administration’s immigration policies,” AP reports.

The buses that arrived late Saturday outside the vice president’s residence were carrying around 110 to 130 people, according to Tatiana Laborde, managing director of SAMU First Response, a relief agency working with the city of Washington to serve thousands of migrants who have been dropped off in recent months.

Local organizers had expected the buses to arrive Sunday but found out Saturday that the group would get to Washington early, Laborde said. The people on board included young children. -AP

The poorly timed dropoff came as temperatures in DC hovered around 15-degrees Farenheit (-9 Celsius) – the coldest Christmas Eve in Washington, according to the Washington Post.

According to Laborde, SAMU First Response provided blankets and quickly shuttled the migrants onto new buses to an area church, while a local restaurant donated dinner and breakfast.

Most of the migrants were headed to other destinations, with the DC stop expected to be temporary.

Harris, President Biden’s border czar, has overseen the relaxing of restrictions on migrants that have caused a flood of Central Americans to leave their countries of origin and head north.