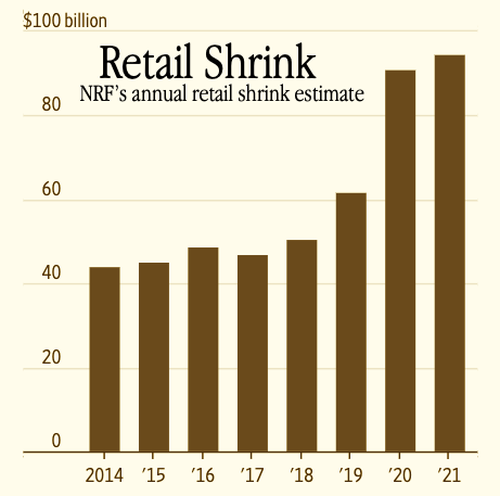 The Season Of Five Finger Discounts: Shoplifting A $100 Billion Problem For US Retailers

US retailers are experiencing unprecedented losses due to a nationwide spike in retail thefts that has become a $100 billion problem for the industry. Brick-and-mortar stores have increased police presence and other theft-deterrent merchandising strategies as store managers beef up security to prevent five-finger discounts.

Across the nation, the number of shoplifting incidents has soared post-Covid, which has concerned the National Retail Federation.

Retail thefts are so bad that Target reported last month that gross profit margins were reduced by $400 million this year. A Target spokesperson said the problem is primarily due to “organized retail crime.”

Organized retail crime has increased under the Biden administration while progressive-run cities implement social justice reform. Criminals are taking advantage of relaxed penalties for shoplifting, fueling a nationwide crime wave. California is one state where retail thefts have spiraled out of control.

In a CNBC interview earlier this month, Walmart Chief Executive Doug McMillon warned that if the retail theft problem weren’t addressed over time, “prices will be higher and/or stores will have to close.”

Needless to say, it is almost impossible to run a profitable business in such a toxic environment of thefts and inflation.

Even Dollar Tree said in its November earnings call that shrink and inflation decreased operating margins at its stores by 1%.

Electronic and drugstores have been hit the hardest:

“It’s a quick in, quick out [layout] with valuable electronics, over-the-counter drugs, cosmetics and beauty care, which are desirable and mobile items,” Read Hayes, a research scientist for the Loss Prevention Research Council, told WSJ.

Walgreens Boots Alliance’s CFO James Kehoe told investors earlier this year that shrink would slash net income “in excess of $0.15 a share” this fiscal year. He said shrink accounted for about 3.25% of the company’s revenue, jumping above historical norms of 2%.

And if progressive politicians nationwide fail to address the shoplifting crime wave, retailers will close up shops and move elsewhere. An exodus would cause their tax base to crumble.