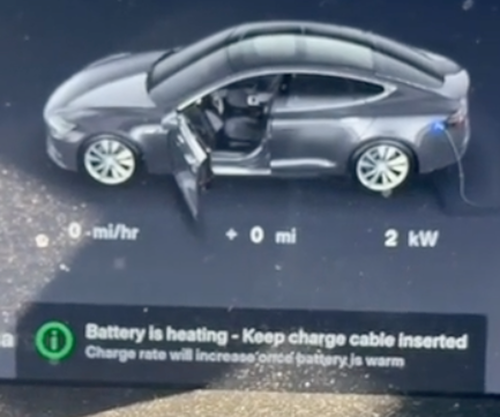 Besides freezing door handles, Tesla owners who braved the cold this Christmas weekend were met with ‘winter range anxiety.’ As we explained last week, cold weather will degrade battery performance. At least one video went viral on Christmas Eve of a person whose Model S wouldn’t charge in the cold at a Supercharger station.

Domenick Nati, 44, a resident of Lynchburg, Virginia, rolled into a Supercharger station Saturday afternoon with 19 miles left of charge. The Tesla’s dashboard showed outside temperatures were 19 degrees Fahrenheit. He made a video about his awful experience over the last 24 hours.

In a video posted on TikTok, Nati said battery issues began on Friday when his Tesla wouldn’t warm up so it could charge. He tried charging at his house and a Supercharger station, but nothing seemed to work. In a last-ditch effort, he went to Supercharger station on Christmas Eve, where he experienced the same issues.

Nati shows in the video that a Tesla alert pops up when he plugs the car into a Supercharger stall. It reads, “Battering is heating — Keep charge cable inserted.”

“Two hours went by and not much changed.

“It was very slow and the numbers got lower as the temperature dropped. Eventually, it stopped charging altogether,” he told Bussiness Insider.

Nati abandoned the Tesla at the Supercharger station, fearing it would run out of juice. He canceled his Christmas plans because it was the only car he had, and adding Tesla customer support and or roadside assistance wasn’t to help him troubleshoot the problem.

The short video had more than 5,000 comments and went viral on TikTok with thousands of likes.