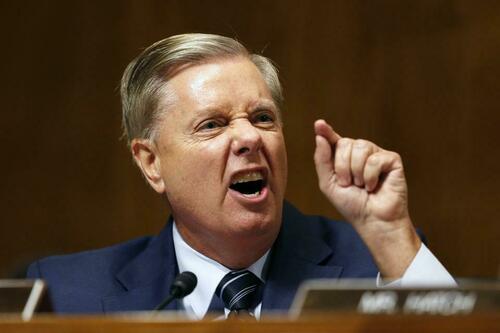 Sen. Lindsey Graham: Someone Must “Take Out” Putin For War To End

Senator Lindsey Graham this week repeated his call for Russian President Vladimir Putin to be assassinated, telling Fox News in a live interview that the Ukraine war will only end if someone “takes Putin out”.

“How does this war end? When Russia breaks, and they take Putin out. Anything short of that, the war’s gonna continue,” Graham said on Wednesday’s America Reports on Fox.

Graham said Moscow’s invasion won’t succeed because the United States is “in it to win it, and the only way you’re gonna win it is to break the Russian military and have somebody in Russia take Putin out to give the Russian people a new lease on life.”

He also called on Washington and NATO to keep up arms and support for Ukraine “completely, all in without equivocation,” and further that ramping up long-range missile transfers to Kiev would help “dislodge” Russian forces from the Donbas, and even Crimea.

He additionally said that larger drones would “kill tons of Russians without losing any Ukrainians in the endeavor” – and essentially called for giving Zelensky everything he’s asking for.

During Zelensky’s Wednesday address to Congress, which actually saw less than half of House Republicans show up, which was in part due to holiday travel and weather given also the visit was unannounced until the day prior, the Ukrainian leader suggested the US should even send tanks and aircraft. “I can assure you that Ukrainian soldiers can perfectly operate American tanks and planes themselves,” he had said during the 30-minute speech.

Lindsey Graham on Fox News: “How does this war end? When Russia breaks and they take Putin out.” pic.twitter.com/yaWt0vpRNV

It wasn’t the first time Graham called for Putin’s assassination on a national news program. In March he made similar statements.

At the time this prompted an official reaction from the White House distancing President Biden from the assassination comments. The White House Press Secretary had said “that is not the position of the United States government and certainly not a statement you’d hear come from the mouth of anybody working in this administration.”