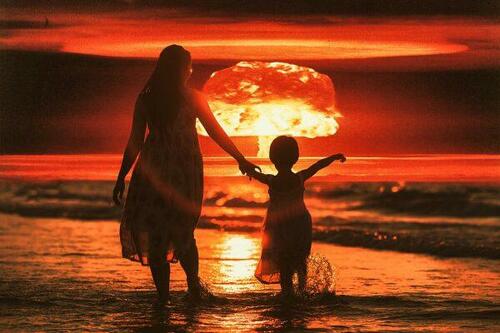 Feverishly Racing Toward Our Own Destruction…

Authored by Michael Snyder via The End of The American Dream blog,

We are careening directly into an abyss of war, pain and misery, and our leaders are thunderously applauding as it happens.  Ukrainian President Volodymyr Zelenskyy came to Washington this week because he wanted more money, and our politicians in Washington definitely did not disappoint him.  Even though we had already given Ukraine far more money than the rest of the world combined, our politicians agreed to give him another colossal mountain of cash.  On some level, we all have to respect Zelenskyy’s skills as a con man.  Even though he has banned the main opposition party in Ukraine, and even though he has banned all television stations that were critical of him, and even though he just banned an entire ancient Christian denomination, our politicians continue to worship him like some sort of a pop music star.  Zelenskyy has become an extremely oppressive dictator that has set himself up to rule Ukraine for as long as he wants, but members of Congress from both parties continue to hail him as a “champion of democracy” that deserves our unquestioning support.

What makes this so dangerous is that Zelenskyy has been trying very hard to pull the United States into his war with Russia.

Throughout 2022 the U.S. has been getting increasingly involved in the conflict, and at this point we are “providing most of the funding, most of the equipment, most of the ammunition, most of the high level intelligence and much of the training” for the international army that is fighting the Russians in Ukraine.

In other words, we are essentially a direct participant in the war.

For years I have been warning my readers that there would be a war with Russia, and now it is here.

If we had rational leaders in Washington, they would be trying to end this conflict before the nukes start flying.

But instead, they are pledging to give Zelenskyy whatever he needs for as long as it takes to defeat the Russians.

When Zelenskyy visited Washington this week, the White House literally rolled out the red carpet for him.

To see such an honor bestowed upon a cruel foreign dictator that is ruthlessly oppressing anyone that opposes him should nauseate all of us.

And when Zelenskyy arrived to deliver his speech to a joint session of Congress, he was greeted with a standing ovation.

Ukrainian President Volodymyr Zelensky (@ZelenskyyUa) receives a standing ovation from lawmakers as he enters the House chamber to address a joint meeting of Congress.

It isn’t just the Democrats that have fallen for Zelenskyy’s act.

At this point, Mitch McConnell says that showering Ukraine with money should be our “number one priority”…

“Providing assistance for Ukrainians to defeat the Russians is the number one priority for the United States right now according to most Republicans. That’s how we see the challenges confronting the country at the moment.”

Thankfully, there are still at least a few voices of reason that can see exactly what Zelenskyy is trying to do.

One of them is Tucker Carlson.

According to Carlson, it is absurd to give a foreign tyrant so much money when we have so many pressing needs here at home.

Tucker Carlson: Zelensky shows up to DC looking like a strip club manager and demanding money. Our aging leadership class will give him billions from our crumbling economy pic.twitter.com/aIvgiQvkJ0

But no matter how hard Zelenskyy oppresses his own people, our politicians are going to continue to shower him with more money, and that is because Zelenskyy has done an amazing job of positioning his war as the most important “current thing”.  I really like how John Nolte made this point in one of his most recent articles…

Zelensky has brilliantly — brilliantly! — positioned himself to be The Thing Through Which The Establishment Proves Its Purity.

Who can give Ukraine the most money?

Who can give Ukraine the most weapons?

Who can give Ukraine the most praise?

Who can lick Zelensky’s boots the cleanest?

Zelensky is getting everything he wants and more, including America flirting with nuclear war. Why? Because he was savvy enough to crack the code of the shallow, insecure, conformist idiots we elect and reelect as our leaders.

Nolte is quite right.

And once a con man has identified a “golden goose”, he is just going to keep coming back again and again.

So even though we have already given Ukraine more money than everyone else combined, it will never be enough to satisfy Zelenskyy.

In addition to cold, hard cash, the U.S. also continues to give the Ukrainians some of our best military equipment.

The Biden administration just agreed to send Patriot missile systems to Ukraine, and that represents another huge escalation.

The Biden administration will send to Ukraine the most advanced air defense weapon in its arsenal, the Patriot missile system, officials said Wednesday, marking the most significant addition to American military support for the government in Kyiv in months.

Meanwhile, the Russians continue to escalate the conflict as well.

In fact, it appears that the Russians have been very busy moving tanks into position for another major offensive campaign from the north.

T-80BV tanks spotted in #Belarus. Preparations for a new offensive on #Kyiv from the north. pic.twitter.com/JGi3Rlq73y

Tanks in Belarus are seen moving from Polonka train station towards Brest. pic.twitter.com/sZbDZLvefC

If both sides just keep escalating matters, we will eventually reach a point where somebody crosses a line that will never be able to be uncrossed.

We have been pushed to the brink of nuclear war, and the Russians are getting ready to officially deploy their new Sarmat intercontinental ballistic missiles in January…

Putin said on Wednesday during a meeting with military chiefs that he aimed to deploy his terrifying RS-28 Sarmat missile – nicknamed Satan-2 – in January.

The world-ending missile can blast targets at almost 16,000mph – meaning it has the potential to obliterate the UK 1,600 miles away in just six minutes.

Sadly, the quote that you just read is not an exaggeration.

Each Sarmat can reportedly carry up to 15 independently-targetable nuclear warheads.

That means that one missile goes up, and 15 warheads come down.

And each one of those warheads can instantly wipe out an entire major city.

The Sarmat is the most advanced intercontinental ballistic missile in the entire world by a wide margin, and we have no way to defend against them.

So maybe we should think twice before getting into a nuclear war with Russia.

Unfortunately, our leaders seem to have gone completely mad at this point, and of course our leaders in Washington are simply a reflection of what has happened to the rest of our society.

When Ronald Reagan described the Soviet Union as the “Evil Empire” in the 1980s, he was quite correct.

But since that time just about every form of evil that you can possibly imagine has absolutely exploded in our own nation.

So are we “the baddies” now?

Sadly, most Americans will not even entertain that question.

And our leaders are just going to continue to push us toward a nuclear conflict that could ultimately mean the end of our society once and for all.