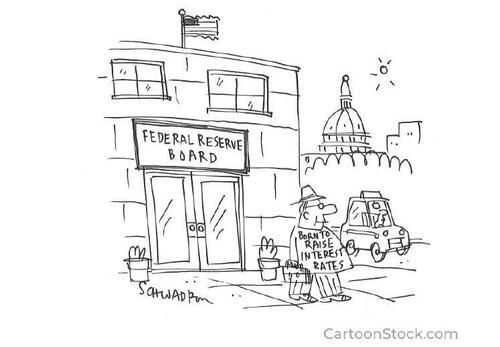 A light-hearted take on 2023, with big consensus-busting “non-forecasts”
Such as Powell takes his Volcker obsession too far; BoE needs a bailout…
…CBDCs realize the conspiracy theorists’ nightmare; Brexit, what Brexit?

Since we first published our annual “Things that won’t happen” outlook in 2015, writing outlandish non-forecasts has become considerably more difficult. Back then, nobody would have taken us seriously if we had said Donald Trump would become US president or the UK would quit the EU or there would be a two-year pandemic with rolling global lockdowns. And the surprises kept on coming in 2022. Suddenly we had central bankers who didn’t seem to care about the stock market (except when trading their own PA positions), equity strategists forecasting actual market declines (admittedly only after their first 15 Buy-The-Dip recommendations had failed) and England not winning the World Cup (again). Meanwhile, nobody could have known that cryptocurrencies were just digital tulips or that paying millions for Jpeg monkey pictures – freely available to anyone with a smart phone – was a bad idea. Anyway, humbled by the silliness of real life, here are some things that won’t happen in 2023 (probably…).

In 2022, Jerome Powell made no secret of his admiration for every central bankers’ hero, Paul Volcker, the 6ft7in former Fed chair who famously broke the back of inflation in the early 1980s. Powell promised to learn from the experience of the 1970s and 1980s, ‘keeping at it’ until he had slain the inflation monster once again. But in 2023, after another global energy shock pushes inflation to its highest-ever level, Powell takes his unrequited bromance with Mr Volcker a step too far, donning two-inch platform shoes and a rumpled dark suit and casually puffing on a large cigar at every public engagement. Things get out of hand in August, as US interest rates hit 25% and Powell insists on entering his FOMC press conference to the tune of “Eye of the Tiger”. His embarrassment is complete when he is finally doxxed on #fintwitter as @IHeartVolcker79 (check out his Twitter feed, which is totally dedicated to “Big Paul” and even includes the occassional love poem). Not to be out done, Christine Lagarde tries to revive the ECB’s own monetary heritage, inviting Otmar Issing to run the economics department at the ECB and forcing all officials to read the historical works of Karl-Otto Pöhl. The BoE’s Andrew Bailey treads a path of defiant British exceptionalism, giving a speech on “Why 15% inflation isn’t really that bad”.

A full-scale nuclear crisis is triggered after an unidentified projectile – thought to be the ball from Harry Kane’s missed penalty re-entering the Earth’s atmosphere – passes through Russian airspace in February. Vladimir Putin once again steps up the readiness of his nuclear arsenal, this time to the “I’m absolutely not kidding, this is totally serious, just try me” level and NATO responds accordingly. War is averted only after Italian Prime Minister Giorgia Meloni engages Putin in a game of online Tic-Tac-Toe and the Russian leader suddenly grasps the futility of nuclear engagement. But there is now no stopping the world’s tilt towards deglobalization. Trade barriers continue to build, supply lines shrink, and Western leaders – egged on by central bankers – introduce a new US$5 per day maximum wage and lower the minimum age for full-time employment. At the same time, the US dollar’s status as the world’s reserve currency is further tarnished, with Trump’s new trading cards emerging as a viable alternative.

The ’don’t-call-it-a-bailout’ Bank of England

As the Bank of England starts to make huge losses on its enormous QE holdings, it quickly becomes apparent that the central bank requires an urgent bailout. After the failure to sell the institution (at a steep discount) to a syndicate involving Elon Musk and the PBoC, the Treasury has no choice but to take the BoE back into government hands. But renationalization comes with stinging conditions, including a strict cap on central banker bonuses, a vastly reduced menu in the lunchtime canteen and the cancellation of the annual staff sports day (which does, in fact, exist…). Andrew Bailey even agrees to take a haircut, albeit under great duress. More than 12,000 members of the Bank’s core forecasting team resign when the government unveils a strict performance-related wage structure. (Fortunately, the ECB is still hiring and its internal pay structure is totally detached from the accuracy of its staff projections – in fact, the bigger the forecast errors, the larger the wage deals.)

The conspiracy theorists’ worst fears are realized when several central banks unveil CBDCs as a new weapon in the war on inflation. These new digital currencies not only give the authorities a direct means of controlling the CPI – since officials can monitor and adjust the price of millions of goods in real time; central banks find they can even have the power to manipulate consumer behavior in ways they had never previously dared to imagine. Thinking of paying more than 2% extra on your weekly groceries? Here’s a small electric jolt to make you think again! Bidding up the price of that item on eBay or in a virtual queue for those just-released concert tickets? Let’s see you do that when the battery life on your smart phone suddenly goes to zero! Demanding a 10% wage hike? Here’s your very own personalized “price stability surcharge”! And don’t worry about filing a tax return, for your convenience we can just make the cash disappear from your bank account! Eventually the public get wise to CBDC manipulation and go back to traditional safe havens, such as digital monkeys, shitcoins and meme stocks.

Something started to go profoundly wrong for the UK economy in 2016. Investment plunged, exports cratered – particularly those to our main trading partners – and the UK was suddenly less attractive to foreign workers. Many businesses are now suffering acute labor shortages and the NHS is on its knees, with waiting lists of up to 97 years. Weirdly, nobody has been able to identify what caused this sudden deterioration in the UK’s performance. Even British politicians – who, with their PPE and classics degrees, number among the smartest and best educated in the world – can offer nothing more than an inaudible mumble when asked how they might restore UK prosperity. Sometimes it’s as if they know the answer but don’t want to talk about it, like they are ignoring a giant pink elephant in the corner of the room. Fortunately, the mystery is solved in 2023 with the help of 175 PhD economists and an “event study” based on literally everything that happened in 2016. And it turns out the answer was staring us in the face: it must have been the discovery of Roman tablets at the site of Bloomberg’s new offices in London. The building is demolished, the tablets reburied, and the UK posts a remarkable boom. “Cool Britannia” is back!

TS Lombard will discover that everything their economists do can be outsourced – at no charge – to Artificial Intelligence software, including the writing of their seminal “Things that won’t happen” report. I’m not joking. Asked to make some “funny economic predictions about 2023”, here is what ChatGPT came up with. DO NOT SHOW THIS TO MY BOSS:

A new fashion trend of wearing clothes made entirely out of money will emerge, leading to a decrease in the amount of physical cash in circulation and curing the inflation problem.
A group of economists will discover that the key to a successful economy is dancing, which will lead to mandatory dance parties being introduced at all workplaces.
A group of rebellious teenagers will start a movement to boycott paying taxes, causing the government to resort to collecting taxes in the form of memes.
A new cryptocurrency called “LOLcoin” will emerge and quickly gain popularity, prompting many people to invest their life savings in it.
The “Taco Tuesday Index” will become the leading indicator of consumer confidence, as people’s willingness to splurge on Mexican food during the week becomes a key metric for economists to track.
The stock market will crash after a group of rebellious llamas take over the New York Stock Exchange and start trading banana stocks.

We are SO doomed.