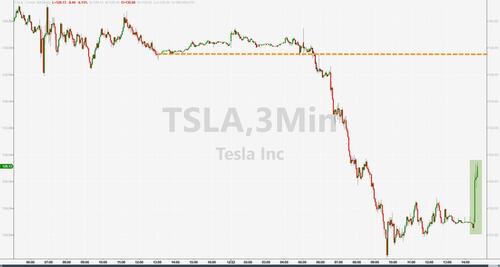 After another ugly day for the EV carmaker, Tesla shares are rising the after-hours market following comments from Elon Musk that he will make no more Tesla stock sales until 2025.

“I’m not selling any stock for 18-24 months. I needed to sell some to make sure there was dry powder for a worst case scenario. You have my commitment that I won’t sell any stock till at least two years from now. I won’t sell stock next year under any circumstances.”

Shares are up 4% in the after-hours…

“If we do have another 2009 situation, the stock price of everything’s going to be lower…

…frankly we’re overdue for a recession”

Adding that with a “hard landing coming. Why would anyone have stocks?”

As far as his time being stretched across numerous companies, Musk noted that his attention is primarily focused on Tesla, adding that the carmaker is a far more complex beast than Twitter…

The Tesla CEO also stated that he “favors buybacks once Tesla understands the scale of the recession,” adding that:

“I stand by my prediction that long term, Tesla will be the most valuable company in the world. I’m actually fairly confident that will be the case.”