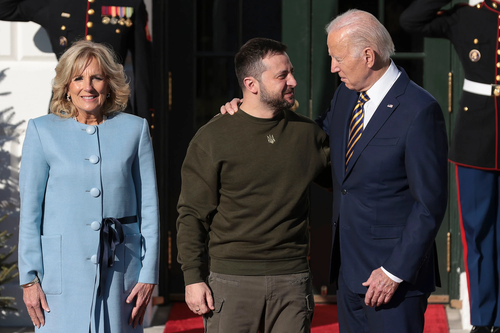 Russia has blasted Ukrainian President Zelensky’s Wednesday visit to Washington and appearance before Congress, calling it a “Hollywood-style trip” that’s meant keep the fires of “proxy war” against Russia burning.

“The Hollywood-style trip to Washington by the head of the Kiev regime has confirmed that the administration’s conciliatory statements about the lack of intention to start a confrontation with Russia are just empty words,” Russian ambassador to the US, Anatoly Antonov, said in fresh statements.

“What was essentially announced to applause and sarcastic smirks, was the need to continue the ‘proxy war’ against our country. Until a complete victory over us,” he added.

During Zelensky’s some 30-minute long speech before Congress, which was frequently interrupted by spontaneous standing rounds of applause from US lawmakers, the Ukrainian leader vowed “absolute victory” to be accomplished “with” the United States – in provocative words given while VP Kamala Harris and outgoing House Speaker Nancy Pelosi were just over his shoulder.

Antonov further blasted the “manic idea of defeating the Russians on the battlefield” in reacting to the speech, also condemning Biden’s newly announced pledge to send Patriot missiles. The Russian ambassador warned that any crew, even if directly from the US or NATO, found manning the Patriot batteries and systems becomes a fair target on the battlefield.

He additionally claimed that throughout the conflict Moscow has tried to “appeal to common sense at all levels,” but blamed the West for upping its supply of longer range missiles and more advanced arms which is leading to escalation and thus future consequences “impossible to even imagine.”

But Zelensky’s address to Congress and “the American people”, which marked a very rare opportunity for a foreign leader, was peppered throughout with phrases like “Only victory!” Near the end of the address he also quoted from Franklin D. Roosevelt’s famous “Day of Infamy” speech.

“The American people in their righteous might will win through to absolute victory,” Zelensky said while quoting FDR, and he followed by pledging that Ukraine too will achieve “absolute victory.”

Caught up w/ the Ukrainian diaspora delegation on their way into the Capitol to cheer for Zelensky
They told me $45 billion wasn’t enough, neo-Nazis do not exist in Ukraine and the banning of the Russian wing of the Orthodox Church & oppo parties was justified bc “martial law” pic.twitter.com/pFE2wmWaH9

As Zelensky arrived in Washington Wednesday, the Kremlin had signaled the trip to the US and meeting with Biden at the White House now means there’s no chance of peace with Kiev.

“The supply of weapons continues and the range of supplied weapons is expanding. All of this, of course, leads to an aggravation of the conflict. This does not bode well for Ukraine,” Kremlin spokesman Dmitry Peskov had said.