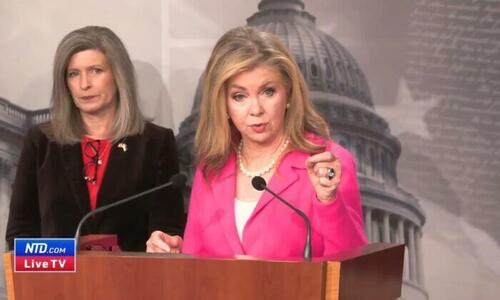 Authored by Chase Smith via The Epoch Times (emphasis ours),

Tennessee’s two Republican senators and Gov. Bill Lee are demanding a response from Immigrations and Customs Enforcement (ICE) on its plans to transport illegal immigrants from New Orleans to the state in a letter sent on Tuesday.

Sen. Marsha Blackburn (R-Tenn.) speaks at a press conference at the U.S. Capitol in Washington on Dec. 15, 2022, in a still from video released by NTD. (NTD)

Sen. Marsha Blackburn (R-Tenn.) posted her frustration with the agency’s lack of transparency, stating “ICE can respond to media requests about trafficking illegal immigrants to Tennessee, but won’t get back to us with information about who they are dropping off in our state.”

However, Blackburn said on Fox News Wednesday the plan is to have “50 at a time” and “at least two buses, maybe more, every single week” into Tennessee.

The agency responded to a request for more information by The Epoch Times with additional information on their plan, noting illegal immigrants had not yet been moved into the state.

The agency told The Epoch Times it has not transported noncitizens for release to Tennessee yet, but officials are in communication with the relevant nongovernmental organizations (NGO) in Nashville, which have volunteered to “assist with noncitizens that may be transported to the Nashville area.”

“Noncitizens apprehended and determined to need custodial supervision are placed in detention facilities and those released from secure custody are part of ICE’s Enforcement and Removal Operations (ERO) non-detained docket,” an ICE spokesperson said in an email. “ERO officers weigh a variety of factors when making general custody determinations, including criminal record, immigration history, community ties, flight risk, and whether the individual poses a potential threat to public safety.”

The spokesperson added noncitizens placed on ICE’s non-detained docket are enrolled in the agency’s “Alternatives to Detention (ATD) program.” The ATD uses technology, case management, and other tools to manage compliance of individuals with their release conditions.

ICE had no further information to release to The Epoch Times as of Wednesday afternoon.

ICE Coordination With NGOs in Nashville

ICE would not release information on the NGOs they were partnering with, but the letter sent by Blackburn and Sen. Bill Hagerty (R-Tenn.) to ICE Acting Director Tae Johnson identifies the group as the Tennessee Immigration and Refugee Rights Coalition (TIRRC).

“We have learned that the New Orleans ICE field office has been working in coordination with TIRRC, a left-wing immigration advocacy group, to bus these immigrants to Tennessee,” the senators said in their letter. “We have learned that as many as 50 single-adult, detained illegal immigrants could be bused to Tennessee at a time, with the possibility of multiple busloads each week. Further, these individuals would be released into Tennessee while they await court proceedings.”

The senators say they are troubled by the report and request more information given “previous instances of ICE busing immigrants to Tennessee without notice.”

TIRRC wrote on Twitter the Department of Homeland Security had listened to “what local organizations and communities have been demanding.”

“DHS took steps to provide more transparency and better coordination to get folks home for the holidays,” the organization wrote on Twitter. “We cannot allow for disinformation, fear, and partisanship to dictate how we treat other human beings. Shame on Gov. Bill Lee’s office for not showing Tennessee’s values of family, integrity, and welcoming others.”

The organization said they, along with other Tennesseans, local organizations, and faith communities are “ready to rise to the opportunity by leading with values and welcoming with dignity.”

TIRRC did not respond to an emailed request for comment by press time.

Tennessee Gov. Bill Lee delivers his State of the State address in the House Chamber of the Capitol building in Nashville, Tenn., on Jan. 31, 2022. (Mark Zaleski/AP Photo)

The governor’s office said notices from the Biden administration on Monday are the first time federal officials have notified the state of plans to relocate “single adult detainees into Tennessee,” adding they have received no further details.

“We know that ICE is seeking to move these single adult detainees to Tennessee, as the federal government is overwhelmed by the continued flood of people and drugs illegally moving across the nation’s border,” a representative for the governor’s office said in an email. “As you may have seen, ICE has said they are working with the TIRRC in Nashville. However, the federal government still has not provided real transparency into the vetting process or included answers as to when, where and how many illegal migrants they intend to transport to Tennessee. We continue to demand answers and demand they change this plan.”

Lee said on Fox News Wednesday morning that “this is something new for Tennessee,” adding the Biden administration “is requiring Tennesseans to pay the price for their failures.

ICE explained Customs and Border Patrol (CBP) screens and vets all migrants encountered at the border against public safety databases, and “any migrants who may pose a threat to national security or public safety are detained.”

The agency said as part of contingency planning they notify local and state-level officials when they are coordinating with local NGOs that intend to offer support to noncitizens.

The agency says those released through ATD must be 18 years of age or older, effectively removable from the United States, and in some stage of the immigration process.