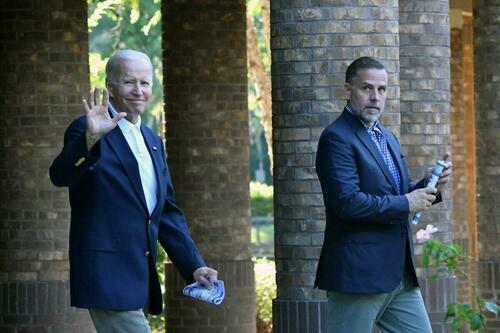 As House Republicans gear up to grill Hunter Biden over a wide range of alleged influence peddling and other illegal activities with members of the Biden family, the First Son has hired famous white collar criminal defense attorney Abbe Lowell of the firm Winston and Strawn.

“Hunter Biden has retained Abbe Lowell to help advise him and be part of his legal team to address the challenges he is facing,” said Hunter Biden attorney, Kevin Morris, adding “Lowell is a well-known Washington based attorney has represented numerous public officials and high profile people in DOJ investigations and trials as well as Congressional Investigations. Mr. Lowell will handle congressional investigations and general strategic advice.”

According to NBC News, Lowell will be primarily responsible for coordinating Hunter Biden’s response to the anticipated congressional oversight investigations, as well as other legal issues.

The incoming House Oversight Committee chairman Rep. James Comer, R-Ky., said at a news conference in November that Hunter Biden and other Biden family members will be a major focus, specifically if the family’s business activities “compromise U.S. national security and President Biden’s ability to lead with impartiality.”  -NBC News

The White House in November accused Congressional Republicans of stoking long-debunked conspiracy theories” in regards to allegations from House lawmakers that President Biden was actively involved in overseas business dealings with his son Hunter.

Except, here’s former Biden business partner Tony Bobulinski explaining how the Biden family brought him in on a shady Chinese energy company deal.

In mid-November, after Republicans retook the House in the midterm elections, GOP Reps. James Comer and Jim Jordan held a press conference to provide details into their upcoming investigations into the Bidens and the Biden administration.

According to Comer, whistleblowers have come forward to detail how Hunter and family “flourished and became millionaires simply by offering access to the family,” Fox News reports.

“Was Joe Biden directly involved with Hunter Biden’s business deals, and is he compromised? That’s our investigation,” he said.

“Committee Republicans’ investigation has uncovered evidence demonstrating deliberate, repeated deception of the American people, abuse of the Executive Branch for personal gain, use of government power to obstruct the investigation and prevent transparency, and potential violations of the United States Constitution’s Foreign Emoluments Clause,” states a GOP report released Thursday.

“The President’s personal participation in his family’s global business ventures—committed through and by a complex network of relatives and associates to enrich the Biden family—has exposed the United States to national security risks that could be leveraged by our enemies to undermine the Office of the President.”