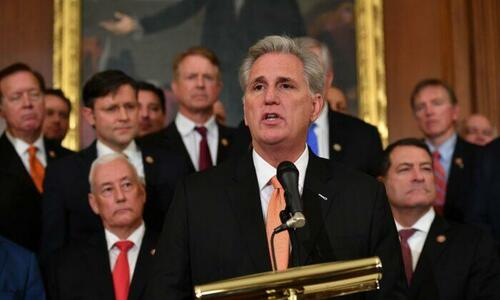 Authored by Caden Pearson via The Epoch Times,

A group of five House Republicans on a shadow committee released a report on Wednesday with key findings about security failings they say were ignored by the official Democrat-led House Jan. 6 committee.

The report focuses on “why the Capitol was left so unprepared” on Jan. 6, 2021, when protests turned violent, and the U.S. Capitol building was breached.

The GOP group’s key findings point to alleged failures by House Speaker Nancy Pelosi (D-Calif.), Democrat leadership, and the U.S. Capitol Police. This includes claims that Republicans were intentionally excluded from security conversations by then-House Seargent at Arms Paul Irving at the direction of Pelosi’s office.

The GOP’s framing will likely contrast with the panel’s soon-to-be-released final report, which is expected to focus on former President Donald Trump.

The GOP group’s report was released before the official final report of the select committee, which was due to be published on Wednesday but was delayed until Thursday.

A video of former President Donald Trump is played during a hearing by the House January 6 committee in the Cannon House Office Building in Washington on Oct. 13, 2022. (Alex Wong/Getty Images)

The GOP group’s report stated that intelligence about the possibility of violence on the day was ignored by U.S. Capitol Police (USCP) owing to “internal politics and unnecessary bureaucracy” and the “misplaced priorities of their leadership.”

“The USCP Intelligence and Interagency Coordination Division [IICD] failed to warn USCP leadership and line officers about the threat of violence, despite the fact that IICD analysts gathered intelligence that clearly indicated a need for a hardened security posture,” the report states (pdf).

The report accuses IICD’s leader Julie Farnam of having “misplaced priorities” that meant analysts were reacting to requests for information rather than seeking out intelligence online.

“We, at the time of January 6, we were not doing proactive searches of social media like we had been before. We were strictly reactive and responding to requests for information,” the report quoted one IICD analyst telling investigators.

Republicans were allegedly left out of important security discussions by Irving, the House sergeant at arms, who the report accuses of doing so under political pressure from Pelosi’s office and House Democrat leadership.

“As a critical member of the Capitol Police Board, the House Sergeant at Arms had an obligation to all Members, staff, and USCP officers to keep them safe by consulting stakeholders without partisan preference,” the report states.

The report states that information was only passed on to Republicans by Irving after he received instruction from Pelosi’s office.

“In one case, Irving even asked a senior Democratic staffer to ‘act surprised’ when he sent key information about plans for the Joint Session on January 6, 2021 to him and his Republican counterpart,” the report claims.

A U.S. Capitol Police officer patrols the east mezzanine of the Capitol on January 6, 2021. (Bobby Powell/Special to The Epoch Times)

USCP line officers were under-trained and ill-equipped to protect the Capitol complex, according to the report, which claimed that an officer testified to investigators that he had only his USCP-issued baseball cap during the violence on the day.

“Even if every USCP officer had been at work that day, their numbers would still have been insufficient to hold off the rioters due to a lack of training and equipment,” the report states.

“The USCP was set up to fail, and there have been scant signs of progress toward addressing these weaknesses.”

The report further claims that USCP gathers evidence on private citizens who meet with members of Congress and senators “not in fact for security purposes.”

“This issue, and others require additional scrutiny by the relevant committees of Congress,” the report states.

Republicans launched an unofficial Jan. 6 investigation concurrently with the well-resourced official panel, which had subpoena power to carry out its inquiries.

By comparison, the GOP report was based on open-source documents and interviews given voluntarily by key witnesses, many of whom were USCP sources who spoke on condition of anonymity, citing fear of retaliation from higher-ups.

The alternative report was written by the five House Republicans selected to serve on the Jan. 6 panel but who were ultimately withdrawn.

But after Pelosi blocked the appointment of Banks and Jordan, McCarthy withdrew the remainder of his nominees.

The two Republicans who served on the panel—Reps. Liz Cheney (R-Wyo.) and Adam Kinzinger (R-Ill.)—were both critics of Trump and were censured by members of the GOP for their participation.

When Republicans take the House next year, it is expected that they will end the Jan. 6 investigations and attempt to discredit its final report.

The Epoch Times contacted the USCP, the House Jan. 6 committee, and Pelosi’s office for comment.