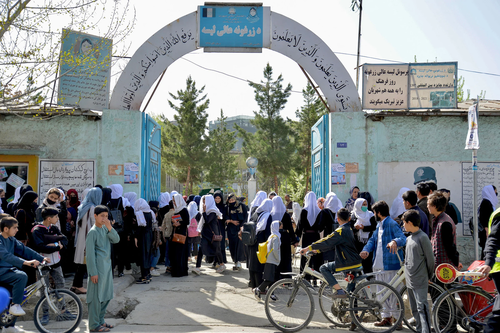 On Tuesday the Taliban suspended university education for all women, and Afghan girls promptly began being turned away from any college campuses, sparking limited attempts at protest.

But on Wednesday it emerged that the ban on education has extended to all levels and ages, even down to elementary schools, which has effectively been suspended for all girls.

Teachers too, have been impacted, as The Wall Street Journal reports, “In a gathering in Kabul with private-school directors, clerics and community representatives, Taliban officials on Wednesday also barred female staff, including teachers, from working in schools, closing off one of the few professions that had remained open to Afghan women under the new government, according to school principals who attended the meeting.”

The new hardline Islamist Taliban laws are so sweeping that they go beyond school campuses, as women can now no longer visit mosques or religious seminaries.

Already there had been a long pause in girls’ schooling following the August 2021 Taliban takeover of the country amid the large-scale US-NATO troop withdrawal, with secondary schools shuttered starting in March. More recently, in some locations many women had just passed college entrance exams and were ready to pursue higher education.

The WSJ is basing its reporting on a high-level Taliban meeting this week where the decision against women in schools at all levels was made:

According to attendees at the meeting, the Taliban said the ban on girls’ schooling would be temporary. However, during their first rule in the 1990s, the Taliban also said a prohibition on girls’ education that they had promulgated was temporary, but was never lifted it.

After the Taliban seized control of Afghanistan in August 2021, they closed schools across the country. Most schools eventually reopened, but girls in secondary school were told to stay at home until conditions—which the Taliban didn’t define—were ready for them to return to classes. The announcement to return to school never came.

The US State Department quickly condemned the “Taliban’s indefensible decision to ban women from universities” – though clearly the Taliban will remain undeterred as the expanded policy is being made known the following day.

Price warned of the further negative impact the decision will have on any Washington engagement with Taliban officials. “With the implementation of this decree, half of the Afghan population will soon be unable to access education beyond primary school,” Price said.

Meanwhile, large pallets of what’s been dubbed humanitarian aid has been showing up at Kabul’s airport, after having been delivered from an undisclosed country or entity. Fox reported last week:

A large package containing around $40 million in cash for “humanitarian aid” was seen on an airport tarmac in Afghanistan, officials there said last week.

The money was handed over to the Da Bank of Afghanistan, the Taliban-controlled central bank of Afghanistan, which is headquartered in Kabul. The bank tweeted several images of the cash. One shows packages of U.S. $100 notes bound in plastic, boxed and bagged in an airport.

Is the Biden administration quietly releasing seized Afghan national assets as a goodwill gesture, and amid a severe humanitarian crisis? If so, the timing will prove interesting and controversial given the first thing the Taliban has done after receiving the likely Western aid is to bar women from schools.