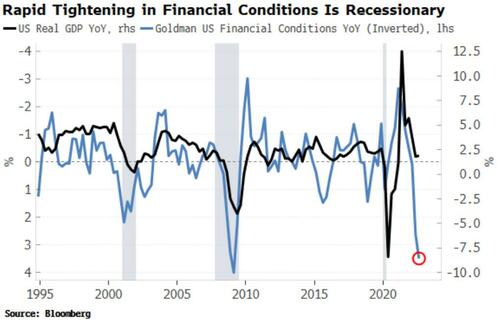 The unexpected risk next year is not a recession, which looks very likely based on the data, but that one happens faster than almost all expect. Front-end Eurodollar or Fed Funds flatteners should do well in such a scenario.

Sometimes it is prudent to be skeptical when all the experts agree, but based on a dispassionate analysis of the data, there is a very high likelihood the US has a recession next year. Indeed, it would be remiss not to forecast one when there is such a weight of data pointing in that direction.

One of the most stark examples is the rapid tightening in financial conditions, to an extent only seen around recessions.

A slump next year should therefore not be shock; but what could surprise is the speed of its onset. That is down to recessions’ regime-shift nature, and the fact that economic data is often revised significantly lower in recessions. So not only is the economy deteriorating in real time, it was already doing much worse than the data intimated. There are already some cracks in job-market data which suggests downward revisions are on their way.

The Fed could thus begin to cut rates sooner than the market expects (currently the first full 25 bps cut is priced in for November next year). Suddenly weaker job market data and inflation which, according to leading indicators should still be falling, would give it enough cover to begin to take back some of its rate hikes. On top of that, real Fed Funds could also be positive as early as March.

How will the short-term rates curve behave in such a scenario? What happened in 2019 when Powell reversed rate hikes serves as a good template. We can see from the chart below that as the Fed cuts rates and becomes more dovish, the curve – already inverted and pricing in cuts – flattens more.

Bringing it back to today, July versus August Fed Funds trades -6 bps and would flatten to around -25 bps if the Fed cut 25 bps as early as July next year, while the one-month negative carry is on the low side at 4 bps. July versus October Fed Funds is similar, or Sep 23 versus Dec 23 Eurodollars (although the negative carry is more). Also, out-of-the-money call spreads on Sep 23 or Dec 23 Eurodollars, taking advantage of rising call skew, should perform well in an early recession scenario.