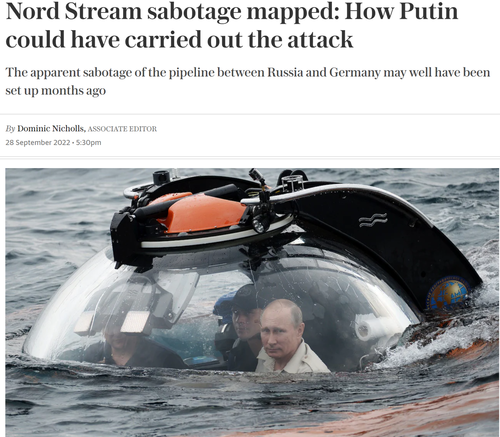 A surprising admission has come in a Washington Post report Wednesday morning following a months-long investigation into the Sept. 26 Nord Stream 1 and 2 pipeline sabotage attacks. While there remains consensus that the explosions were indeed the result of a deliberate act of sabotage, numerous officials in the West now say the evidence is not pointing to Russia.

WaPo begins by recounting the frenzied rush to immediately blame Moscow, which began within a mere hours into the massive gas leaks into the Baltic Sea:

After explosions in late September severely damaged undersea pipelines built to carry natural gas from Russia to Europe, world leaders quickly blamed Moscow for a brazen and dangerous act of sabotage. With winter approaching, it appeared the Kremlin intended to strangle the flow of energy to millions across the continent, an act of “blackmail,” some leaders said, designed to threaten countries into withdrawing their financial and military support for Ukraine.

These headlines with images didn’t age well (The Telegraph).

And then comes this admission: “But now, after months of investigation, numerous officials privately say that Russia may not be to blame after all for the attack on the Nord Stream pipelines.”

The Post issued the rare about-face of accusations after interviewing a total of 23 diplomatic and intelligence officials in nine countries who have been privy to the international investigation into the sabotage incident which has threatened European energy supplies going into winter.

“There is no evidence at this point that Russia was behind the sabotage,” one European official is quoted as saying.

Further, the report indicated, “Some went so far as to say they didn’t think Russia was responsible. Others who still consider Russia a prime suspect said positively attributing the attack — to any country — may be impossible.”

Among other prime suspects and theories, typically echoed in independent and alternative media, is that the United States is to blame. At least one UN official and prominent economist shocked a Bloomberg panel in suggesting this in early October…

Shocking moment of truth on Bloomberg when Professor Jeffrey Sachs says he believes the US was behind the Nord Stream pipelines destruction. The reporters start to lose it, of course. pic.twitter.com/CteWb7utcv

A German government assessment that was the result of its own investigation has confirmed that explosives were places on the outside of the pipelines and underwater structures, while seismologists have detailed three explosions that caused four total leaks on NS-1 and 2.

The absolute consensus is that a nefarious actor did it, but as WaPo concludes of the various European assessments: “…even those with inside knowledge of the forensic details don’t conclusively tie Russia to the attack, officials said, speaking on the condition of anonymity to share information about the progress of the investigation, some of which is based on classified intelligence.”

A question that hasn’t been asked enough in the wake of the sabotage attack is… Cui bono?