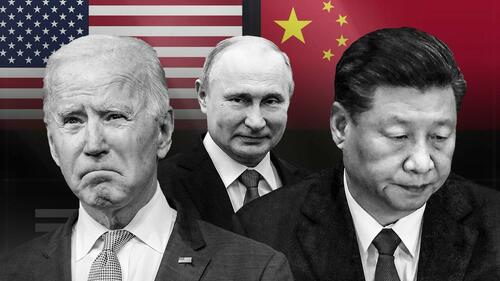 By Eric Peters, CIO of One River Asset Management

“Taking into account the terrorist act by the Kyiv regime with the participation of British experts against the ships of the Black Sea Fleet and civilian vessels involved in ensuring the security of the grain corridor, the Russian side suspends participation in the implementation of agreements on the export of agricultural products from Ukrainian ports,” announced Russia’s Ministry of Defense on Saturday.

“The preparation of this terrorist act and the training of military personnel of 73rd Marine Special Operations Center were carried out under supervision of British specialists in the city of Ochakov, Nikolayev region in Ukraine,” continued the Ministry, further accusing the British Navy of being behind the September Nord Stream pipeline attacks.

The British Defense Ministry responded with the following:

“To distract from their disastrous handling of the illegal invasion of Ukraine, the Russian Ministry of Defense is resorting to peddling false claims of an epic scale.”

Video of the drone attacks went viral, but unsurprisingly provided no direct evidence of UK involvement.

We may never know whether the British were involved.

Just like we may never know whether Covid-19 leaked from a Chinese lab.

At the time, it seemed to many reasonable people to be the most likely explanation.

But we were told that it categorically was not.

Until this week, when a US Senate report confirmed that, “It appears reasonable to conclude that the COVID-19 pandemic was, more likely than not, the result of a research-related incident.”

Naturally, none of this matters to the millions who died of Covid.

Or to the millions who will die of starvation due to the Ukraine conflict and its associated supply chain disruptions.

It will only matter in a year or two, when starving refugees flood into Europe from the Middle East and North Africa.

And for those of us paid to invest, the thing that matters most is that the world’s most heavily armed governments are becoming explicitly hostile toward one another.

Stirring up their citizens, who no longer know what to believe.