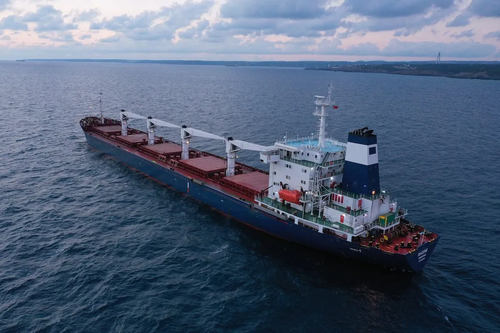 No grain shipping traffic is planned through the Black Sea safety corridor for Sunday, the Istanbul joint center coordinating the UN deal’s logistics said, after it collapsed Saturday. Russia suspended its participation in the Ukraine grain export deal on Saturday, after a swarm of drones targeted at least one Russian warship from the Black Sea navy.

Sunday marks the first day in months that export ships from Ukrainian ports are not traversing the corridor, since the deal was enacted in July. Western countries are now urging the deal’s restoration and for Russia to re-engage in its obligations under the arrangement.

“A joint agreement has not been reached at the JCC for the movement of inbound and outbound vessels on 30 October,” the deal’s coordination center confirmed. “There are more than ten vessels both outbound and inbound waiting to enter the corridor.”

European Union foreign policy chief Josep Borrell said on Sunday, “Russia’s decision to suspend participation in the Black Sea deal puts at risk the main export route of much needed grain and fertilizers to address the global food crisis caused by its war against Ukraine.”

Borrell added in the public Twitter statement, “The EU urges Russia to (reverse) its decision.” The deal was due to be renewed on November 19, and so far an estimated 9 million tonnes of Ukrainian grain has been exported under the plan. UN Secretary General Antonio Guterres is also urging the deal’s immediate restoration.

As expected, the White House issued a scathing reaction, charging that Moscow has returned to a policy of essentially holding global food supply hostage. President Biden slammed the Kremlin’s suspending the grain deal as “purely outrageous”.

Any act by Russia to disrupt these critical grain exports is essentially a statement that people and families around the world should pay more for food or go hungry. In suspending this arrangement, Russia is again weaponizing food in the war it started, directly impacting low- and middle-income countries and global food prices, and exacerbating already dire humanitarian crises and food insecurity.

Ukraine’s President Zelensky charged: “This is a transparent attempt by Russia to return to the threat of large-scale famine in Africa and Asia,” in his Saturday night address.