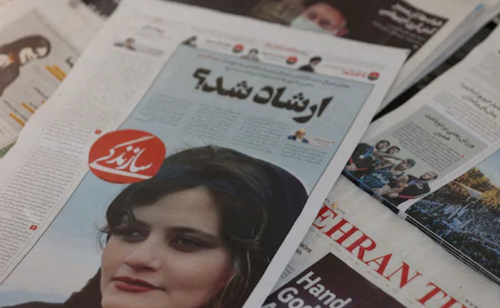 Iran has formally accused two female Iranian journalists with being CIA spies and the “primary sources of news for foreign media,” after they helped break the story of Masha Amini, a 22-year-old Kurdish Iranian woman whose death while detained by so-called ‘morality police’ last month sparked a nationwide uprising.

A newspaper with a cover picture of Mahsa Amini, a woman who died after being arrested by Iranian morality police, is seen in Tehran on Sept. 18. (Wana News Agency via Reuters)

The accusation is punishable by death.

According to the Washington Post, Journalists Niloofar Hamedi and Elahe Mohammadi are currently being held in Iran’s Evin prison, where they have been since late September following the publication of their article and the subsequent feminist protests calling for the overthrow of Iran’s clerical leaders.

In the joint statement sent to Iranian media late Friday local time, the Iranian Ministry of Intelligence and the intelligence agency of the Islamic Revolutionary Guard, the highly-feared guardians of Iran’s security state, accused the CIA of orchestrating Hamedi and Mohammadi’s reporting, and said “allied spy services and fanatic proxies,” planned the nationwide, leaderless unrest.

The CIA, along with British, Israeli and Saudi spy agencies, “planned extensively to launch a nationwide riot in Iran with the aim of committing crimes against the great nation of Iran and its territorial integrity, as well as laying the groundwork for the intensification of external pressures,” the unsubstantiated statement charged. It also claimed without providing evidence that the two journalists were trained abroad and sent to provoke Amini’s family and spread disinformation. -WaPo

The journalists’ editors have denied the charges, and said the women were only doing their jobs.

“What they have referred to as evidence for their charges is the exact definition of journalists’ professional duty,” said the Journalist Association of Iran said in a statement Saturday.

Other journalists outside Iran told the Post that neither Hamedi nor Mohammadi were their original sources.

“This is a threat to other journalists, other media that if they continue publishing the news … they are going to have these charges,” said France-based journalist Aida Ghajar, with the Iran Wire news outlet.

According to rights groups, over 200 people – including dozens of children – have been killed during the crackdown over the protests, and more than 12,000 have been arrested. On Monday, authorities began issuing charges to some 500 protesters who have been detained.

Meanwhile, around 45 Iranian journalists have been arrested according to the New York-based Committee to Protect Journalists.

“This scenario” of branding reporters as foreign spies “is the scenario that the Iranian regime always uses against the journalists.”

How about anonymous government sources claiming that journalists are spreading Kremlin disinformation?