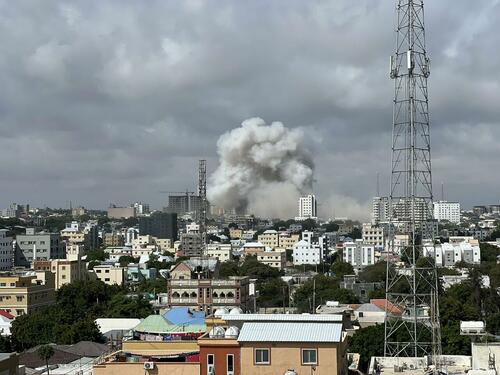 Twin explosions rocked the center of Somalia’s capital of Mogadishu on Saturday, killing as least 30 people and wounding dozens more.

Prime Minister Hamza Abdi Barre blamed the al-Qaeda linked terrorist group al-Shabab by name, which has a history of conducting large-scale bombings in urban centers; however, the group didn’t claim responsibility in the immediate aftermath.

Two car bombs detonated at a busy roadway in the center of the city, leaving “scores of civilian casualties” – and among them children, according to a national police statement. A hospital official said at least 30 bodies were present at the scene of the blasts.

According to The Associated Press, “The attack in Mogadishu occurred on a day when the president, prime minister and other senior officials were meeting to discuss combating violent extremism, especially by the al-Qaida-affiliated al-Shabab group that often targets the capital. It also came five years after another massive blast in the exact same location killed over 500 people.”

The bombings appeared planned to result in as many civilian casualties as possible, given the second car bomb went off at the moment emergency responders arrived, with an ambulance destroyed by that follow-on explosion.

“I was 100 meters away when the second blast occurred,” a Somali eyewitness Abdirazak Hassan, was quoted in AP as saying. “I couldn’t count the bodies on the ground due to the (number of) fatalities.”

The major terrorist attack comes months after last Spring President Joe Biden approved the re-entry of US forces into Somalia. The Pentagon has since deployed some 500 troops in order to advise and assist Somali national forces in fighting al-Shabab terrorists.

#SOMALIA ATTACK: Devastating scenes of carnage in #Mogadishu. Today’s horrific bombings at the education ministry in a crowded and bustling area in the capital is a grim reminder of how deadly the country’s armed conflict remains for ordinary Somalis. pic.twitter.com/llwIZcYeNp

US Africa Command (Africom) described the force as a “small, persistent US military presence” – however which could increase in the wake of this new terror bombing.