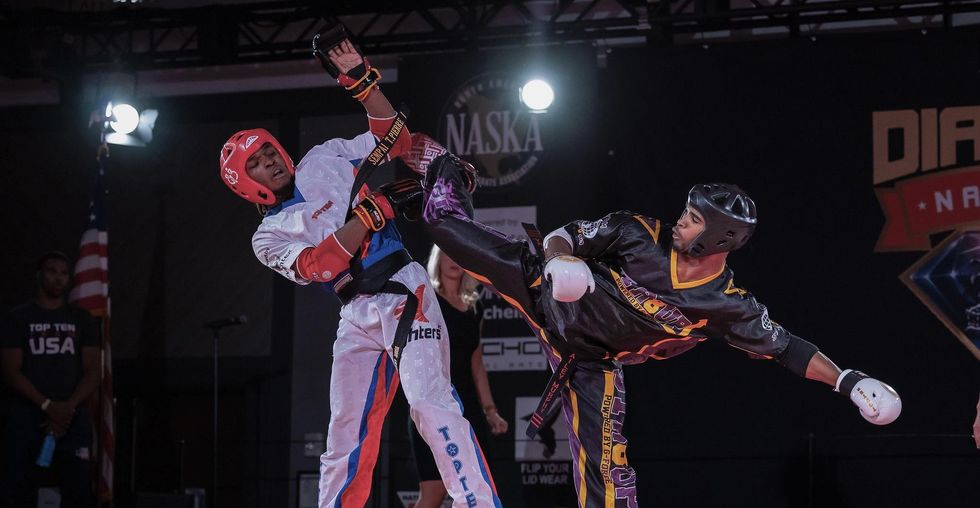 This article celebrates the one-year anniversary of Jackson’s Five, dating back to the Diamond Nationals in 2021 when the historic megafights between Morgan Plowden and Ki’Tana Everett for the diamond ring, as well as Bailey Murphy and Avery Plowden for Virtual Fight Tour’s Last Man Standing, took the top honors on my countdown. I plan to continue these write-ups for every major sport karate tournament that I attend, and I am grateful for all the support these articles have received thus far. As a way of celebrating one year of these articles, I’ll start this countdown a bit differently with an honorable mention.

This is an honorable mention because the Jackson’s Five is meant to highlight the athletes, but I saw a few situations at Diamonds in which judges who have dedicated a lot to this sport deserved some praise. Everyone always talks about what is wrong with judging, rarely do we highlight judges who do an exceptional job.

The first instance was in the 14-15 boys’ point fighting ring when Joey Perry took an extra five minutes to explain how the rules were going to be applied in his ring. In a division with a lot of local competitors and unique circumstances like the application of the out of bounds rule in a 7×7 ring, this was a welcomed use of time that got every coach and athlete in the division on the same page. If every center referee had the presence of mind to do this for their ring, it would significantly reduce the amount of arguments and arbitrations that occur when a ruling is unclear. I thought this was an awesome gesture by Mr. Perry.

The other instance was in the 14-15 girls’ traditional weapons division when Charlie Lane addressed the athletes after the division. It was a rather large division, and as is the case oftentimes with large divisions, some of the scores were all over the place. One of the reasons that there was such variability in the scores was because Mr. Lane enforced the RIGHT way to use the maximum deviation rule. All too often I see judges have conferences before scoring so that they can adjust for maximum deviation ahead of time. Not only is this a waste of time because both major scoring systems used on the NASKA world tour will apply the deviation rule automatically, but it can cause less-experienced judges to be unintentionally peer pressured into changing their scores entirely based on the opinions of the other judges. A judge should give the score that they see fit, and the athletes should be able to see that score regardless of whether it will be adjusted for deviation or not. Mr. Lane explained the deviation rule to the athletes very well and let them know why the ring was operating this way, which is a shining example of how to apply this rule and how to educate athletes about it.

Now that I’m off my soapbox about judging and the maximum deviation rule, let’s shift our focus to some incredible athletes that put their skills on display. Jeff Doss is the only featured competitor on this countdown that did not win a diamond ring, but I am a firm believer that performances are more memorable than wins. “Sushi” pulled off one of the most difficult traditional forms that has ever been done in competition. Moon Moo, a 4th degree black belt poomsae from the ITF taekwondo system, is full of ridiculously difficult, slow-extension kicks that result in nearly 70% of the form being done on one foot. The balance, leg strength, endurance, and skill needed to pull off this form is extraordinary. Who better to pull it off than one of the greatest kickers in the history of sport karate? I wanted to be sure that Jeff Doss got his flowers in this article, because he deserves them as much as anyone on this list. I just hope I get to see him run this form again on a NASKA stage.

Following this theme of performances meaning more than wins, I feel Salef Celiz’s diamond ring-winning effort in the men’s CMX forms division aligns well with this idea. Salef will remember this career-defining win for the rest of his life, but the crowd of Team AKA members rooting for him stageside will remember the moment forever too. Not only did Salef perform an excellent form complete with clean execution, his signature creativity, and elite tricking skills, but he did it while performing to his idol and mentor’s signature song. Micah Karns, arguably the greatest Team AKA member since Brendon Huor, is revered by everyone in the Team AKA system. Countless times he took the stage to “Lights” by Ellie Goulding and brought us performances that would inspire generations. Salef Celiz was clearly one of the young martial artists inspired by those forms and to see him pay tribute to Micah in that way was truly special. Congratulations to Salef on a big win, but an even bigger moment.

Joey Castro came up to me as I was preparing my notes to commentate the night show and shared a variety of helpful information to tell the audience about his form. He taught me some of the details of the kata that he planned to perform that evening, and more importantly told me how significant a win would be for him. Before the Diamonds, Castro had won an overall grand championship at every event on the NASKA world tour. A win in Minneapolis would complete a collection that is reserved for only the greatest and most consistent of sport karate athletes. He took the stage early in the night show, wearing his warm up gear, to accept his diamond ring for winning the senior forms and weapons title during the eliminations. That wasn’t enough, the 37-year-old wanted to prove that he could take down the young guns as well. Despite the aforementioned stellar performance of Jeff Doss and a remarkably strong kata by Cameron Klos, Castro overcame the adversity and left the stage with a ring on his finger. He did it with his signature kata too, Hyaku Hachi Ho, which is the Shotokan version of Suparinpei and is the longest kata across multiple styles of traditional karate.

I don’t think that there have EVER been as many back-to-back champions at the Diamond Nationals as there were this year. Obtaining the highest honor at one of the world’s most prestigious sport karate tournaments two years in a row is an amazing achievement and deserves recognition. Alex Mancillas and Jake Presley of Team Paul Mitchell both repeated their wins in the CMX and traditional weapons divisions respectively. Mancillas came out of top of a stacked final that included teammates Jake Presley and Dawson Holt, as well as Rashad Eugene. Presley also had to battle against a teammate to earn his win as he and Dawson Holt clashed in the traditional final, a common theme this season. In the women’s divisions, Haley Glass took this accomplishment to a whole new level. She was the defending champion in BOTH the forms and weapons divisions, and she was able to defend both titles. What is even more impressive is that she was not able to run her signature kama form that powered her to multiple wins this season in the weapons final, so this time she got the job done with her traditional sword form. Lastly, Bailey Murphy pulled off the back-to-back-TO-BACK in the lightweight point fighting overall grand championship. That’s right, Murphy won his third consecutive diamond ring dating back to 2019 and became the first men’s point fighter in history to achieve this feat. This time, he made it through a stacked division of lightweights yet again, and faced friendly foe Tyreeke Saint in the final. Saint had his moments in the match, but by the second round it was all Bailey Murphy as he became the fourth athlete to repeat as champion on the evening.

The primary reason that I lost my voice shortly after commentating the night show was because of all the yells of excitement that came out during the women’s team fighting and women’s diamond ring final. The team fight saw Jimena Janeiro and Peyton Fender of Team Revolution take on a hybrid team of Beatrice Garcia from Team Legend and Mouse Millner from Team CBR. Fender and Millner squared off in the first round as Fender rode the momentum of a recent hot streak to a two-point lead for Revolution. In the second round, Janeiro started to pull away from Garcia and brought victory to Revolution in dominant fashion. Janeiro would return to the ring later that evening to fight Drew Beatty for the coveted diamond ring. This matchup was more closely contested, as Beatty used her long legs and elite kicking ability to keep Janeiro on the perimeter and set up scoring opportunities including a beautiful hook kick in the first round. Janeiro, however, was able to work the outside of the ring well and took advantage of opportunities to attack on the blitz. As she started to pull away, Beatty responded to the adversity and brought the match back to within a point, but as time dwindled in the second round Janeiro went on one more run and earned a well-deserved place in history as a diamond ring winner. The team fights and diamond ring final, highlighted by the outstanding performances of Janeiro, prove why female point fighters should be featured in the finals more prominently and more consistently.

Special thanks to Lindsey Little Photography for the images used in this article. You can find more of her work on Facebook and Instagram.