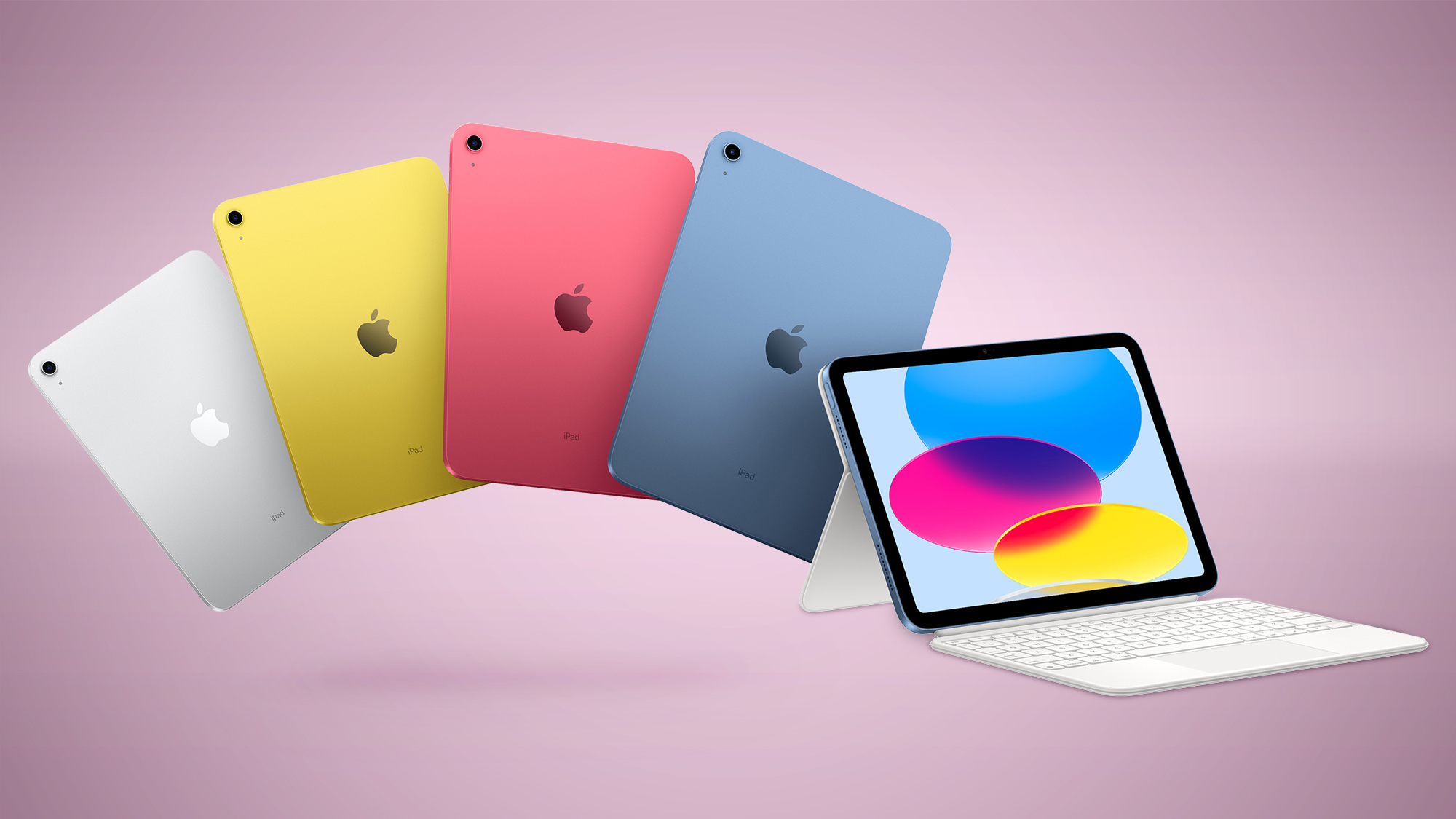 The completely redesigned 10th-generation iPad will start arriving to customers and launch in stores on Wednesday, October 26. Ahead of time, the first reviews of the new iPad have now been shared by select media publications and YouTube channels.

Key new features for the 10th-generation iPad include a larger 10.9-inch display with slimmer bezels, flat edges, the A14 Bionic chip, a USB-C port, a Touch ID power button, a landscape-positioned FaceTime camera, 5G support on cellular models, Wi-Fi 6, and a new two-piece Magic Keyboard Folio accessory with a row of function keys. Pricing starts at $449, with the ninth-generation iPad remaining available for $329.

The new iPad is available in Blue, Pink, Silver, and Yellow finishes, bringing some vibrant new colors to the lower-cost iPad range. iJustine shared a video unboxing of all of the new colors, providing a first hands-on look at the options in the real world.

Here’s a look at all of the new color options side by side:

We have rounded up written and video reviews of the new iPad below.

The Verge‘s Dan Seifert said the 10th-generation iPad sits in an awkward position between the iPad Air and the ninth-generation iPad:In a vacuum, there’s very little to complain about with the 10th-gen iPad. It’s an excellent tablet that does all of the things you expect from a tablet very well. Even though its screen isn’t as good as other iPads, it’s still good enough, and its performance is unimpeachable. If this was the only iPad Apple sold, many people would buy it and be perfectly happy with it.

But in context with the many other iPads that Apple sells, I’m not sure why you’d pick this one. If cost is a factor, you’re buying an iPad for a kid, or need a headphone jack, the still-available and much less expensive ninth-gen model is the one to go with. For a lot of people, the ninth-gen model is the better iPad for their needs. If you want the bigger screen and more modern design, the iPad Air is right there with its better display, even faster processor, and better accessory landscape, and you can frequently get it for less than $100 more than the new iPad.WIRED‘s Brenda Stolyar also felt the new iPad sits in an odd spot in the lineup:When you crunch the numbers, reality sets in. The affordable and plenty-capable iPad that used to start at $329 has now been hiked up to $449. That’s without the added cost of accessories (Apple charges $249 for the Keyboard Folio). It’s tough to justify a $120 price hike over its predecessor—especially when one of the “upgrades” is the removal of the headphone jack. It doesn’t help that Apple is continuing to sell the ninth-gen iPad for $329, and you can typically find the iPad Air for roughly $519 at retailers like Amazon. The 10th-gen tablet sits in an odd spot.CNET‘s Scott Stein praised the new landscape FaceTime camera:The one big thing I wanted from the iPad arrived, like a magic wish granted: The weirdly placed front camera on the iPad is now on the landscape edge. This is great. Why is this great? Because I work on iPads in landscape mode, in cases and stands and keyboard docks. When I Zoom or FaceTime on other iPads, my face looks weirdly off-angle with my eyes looking elsewhere. That’s fixed now. Combined with the auto-zooming Center Stage tech, this iPad’s video chat camera is absolutely perfect.Tom’s Guide‘s Mark Spoonauer shared benchmark results showing that the A14 Bionic chip in the new iPad is up to 30% faster than the A13 chip in the previous model:On Geekbench 5, which measures overall performance, the iPad 2022 scored 1,580 on single-core and 4,400 on multi-core, which is a marked improvement over the 1,384 and 3,387 turned in by the 9th gen iPad. However, the iPad Air with its M1 chip scored a much higher 1,707/7,151.TheStreet‘s Jake Krol pointed out that beyond the 10th-generation iPad requiring an adapter to charge and pair the first-generation Apple Pencil, the device is a good buy, but he still recommends considering the ninth-generation iPad for its value:The oddities come with the first-generation Apple Pencil support. I’m all for the move to USB-C, but it’s not the most Apple-like experience for charging it. There’s also the fact that the adapter is pretty hard to come by right now.

But if you can look past that, it’s an excellent iPad and if you’re someone who’s looking to swim between iPad tasks and more advanced ones, this is an excellent choice. The $449 price tag also includes 64GB of storage which is clutch. It can also be paired with the $249 Magic Keyboard Folio for a laptop-like experience that really lets you get work done here. And when it’s time to play just detach the keyboard.

Of course though, you have to consider the 9th Gen iPad which still offers stellar performance and frequently falls below the $329 price tag. If you’re not after the modern build of the 10th Gen or the new folio covers, that might be the best option for you.