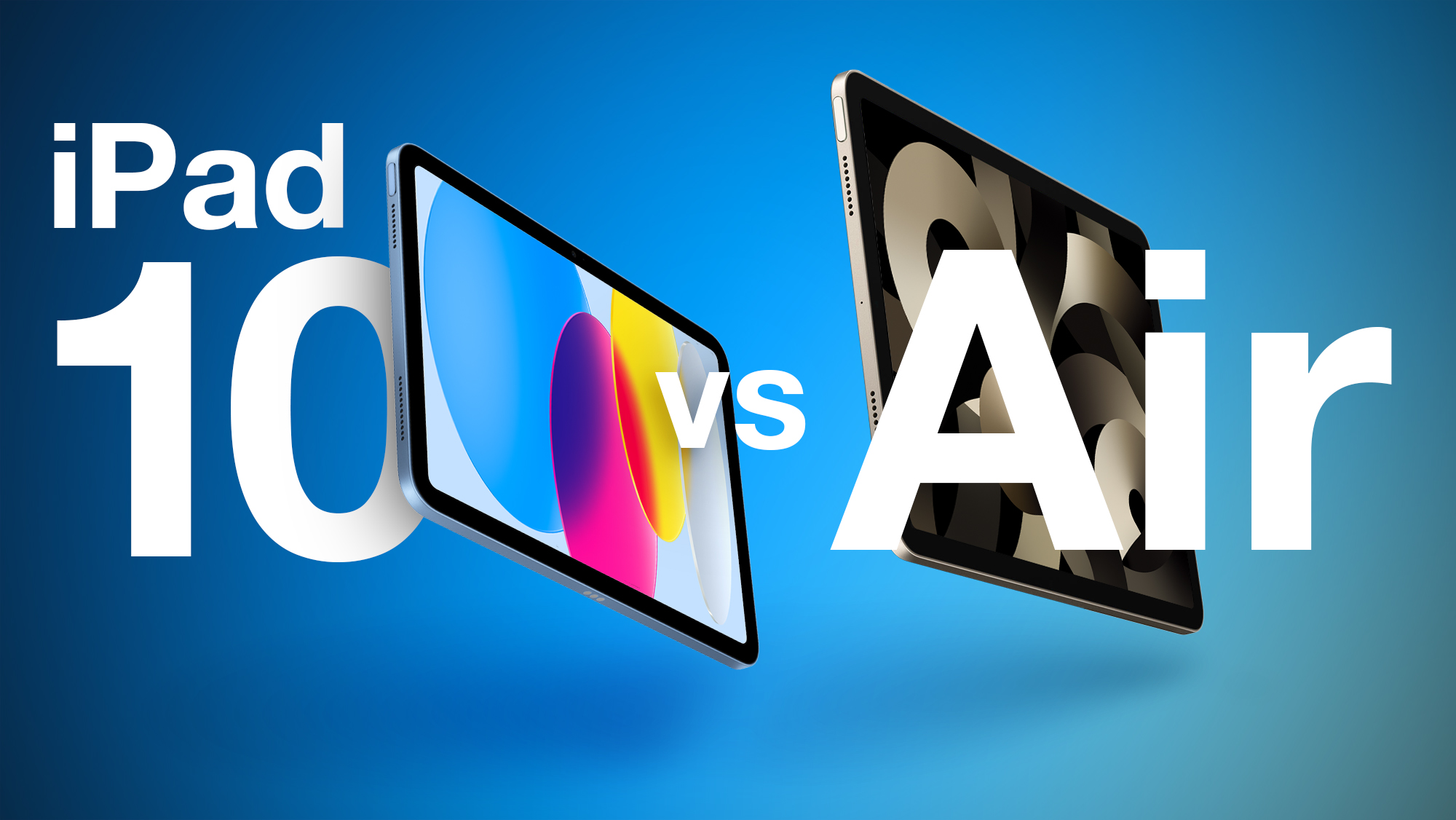 With the same design, display size, camera systems, and more, the entry-level iPad is now closer than ever to the iPad Air. With just $150 between the two devices, exactly how different are they and which should you buy?

The 10th-generation model completes the transformation of the ‌iPad‌ product lineup toward a flat look with squared-off edges, no home button, and an all-screen design with curved corners. With the exact same display size and identical features like a Touch ID top button, USB-C port, and 5G connectivity, many prospective customers may now be considering a purchase of the standard ‌iPad‌ instead of the ‌iPad Air‌ – but there are more differences between the devices than immediately meets the eye.

The M1 chip and double the amount of memory make the ‌iPad Air‌ much more powerful than the 10th-generation ‌iPad‌. Combined with a more advanced display, support for the second-generation Apple Pencil, a thinner and lighter design, and even a different selection of color options, many users still have good reasons to preference the ‌iPad Air‌.

So should you consider buying the 10th-generation ‌iPad‌ to save money, or do you need the ‌iPad Air‌ instead? This breakdown serves as a clear way to see all the similarities and differences between the two devices.

Beyond their designs, the two iPads share the majority of their fundamental features, even including storage options:

Up to 10 hours of battery life

Media engine with video encode and decode endines for hardware-accelerated H.264 and HEVC

The main difference between the devices is their chips and amount of memory, so if you plan on using your ‌iPad‌ for more demanding tasks like 3D graphic design, advanced photo editing, and gaming, the ‌iPad Air‌ will be the better choice by far. The ‌M1‌ chip’s dedicated media engine will also be particularly helpful when video editing, and supports ‌Stage Manager‌, Apple’s new multitasking system for the ‌iPad‌.

The 10th-generation ‌iPad‌’s display lacks P3 wide color, full lamination, and an anti-reflective coating. While these aspects are unlikely to be major reasons to preference the ‌iPad Air‌, they are worth bearing in mind when trying to justify the $150 leap to the more expensive device.

The ‌iPad Air‌ is marginally thinner and lighter, with differences that are so minor as to be unimportant to most customers, but the more muted tones of its color options may make it more or less appealing based on your personal preferences.

The only sense in which the ‌iPad‌ is materially better than the ‌iPad Air‌ is Bluetooth 5.3 connectivity, but this is a very minor difference. The landscape front-facing camera may provide a better video-calling experience, but the camera hardware itself is identical.

In theory, the ‌iPad Air‌ is a more compelling package with the ‌M1‌ chip, 4GB of additional memory, a dedicated media engine, ‌Stage Manager‌ for multitasking, a better display, and a much better ‌Apple Pencil‌ experience, but in practice, users are unlikely to notice much difference between the devices. Unless you have specific needs for the ‌iPad Air‌’s added features, it will be worth saving the $150 and buying the 10th-generation ‌iPad‌.

This article, “iPad 10 vs. iPad Air Buyer’s Guide: Is the $150 Difference Worth It?” first appeared on MacRumors.com