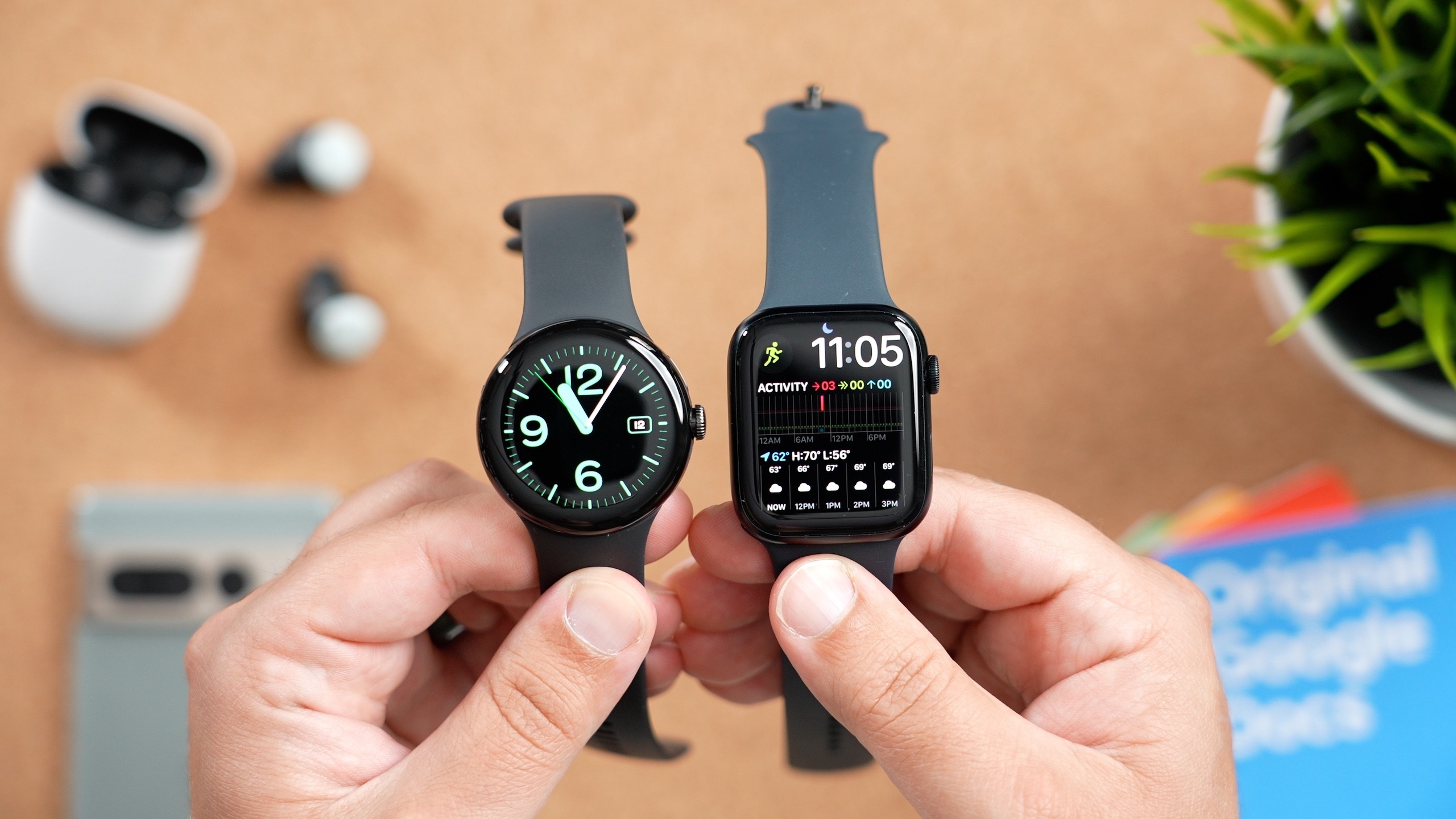 Google last week unveiled the Pixel Watch, a Wear OS-based smart watch that has a round display and a suite of health tracking features. We picked up a Pixel Watch and thought we’d compare it to Apple’s newest flagship wristworn device, the Apple Watch Series 8.

Since the Apple Watch launched in 2015, Apple has not strayed from a rectangular watch face, while other Android manufacturers have toyed with round designs more like traditional watch faces. Google has opted to go with a round design, and the end result is one of the better round smart watches that we’ve seen.

Unfortunately, there are some thick bezels on the Google Watch because of the round face, but Google has adopted a dark UI that goes a long way toward reducing their obviousness. Apple has cut down on bezel size over the years, so you’re getting more display area on the Series 8. The round form factor works well most of the time, but it’s not great when notifications are coming in because it’s a rectangular notification box attempting to fit in a circular display.

In terms of size, the Pixel Watch is delicate. It’s 41mm in diameter, so it feels more petite than the 44mm ‌Apple Watch Series 8‌. It’s more akin to the 41mm Apple Watch, and it’s dwarfed by the larger and more feature rich Apple Watch Ultra.

There’s a side button and a crown on the Pixel Watch for control purposes, and the buttons are reminiscent of the Apple Watch. The bands are too, with Google coming out with some Sport Band-like straps, among other options. Bands click in like they do on the Apple Watch, with a slide in and twist motion.

It has heart rate tracking, ECG capabilities, and detailed workout tracking with heart rate zones and support for around 40 types of workouts. Emergency SOS is built in, sleep tracking is included, and fall detection is coming later in the year. There is no temperature sensor, a feature new to the Series 8, and while a blood oxygen sensor is included, it is not activated.

Some of the health tracking features do require a Fitbit premium subscription, priced at $10 per month. You’ll need to pay this fee if you want options like the traditional Fitbit readiness score. Google does include six months free, but eventually, some features will be locked.

Battery life varies quite a bit on the Pixel Watch. With the always-on display, it drains quickly, plus there’s a feature that constantly monitors heart rate that can drop it down. With those options turned off, it can last for up to 24 hours, beating out the Series 8.

All in all, the Pixel Watch is a decent smart watch that could one day inspire Apple to offer another display design. You’re obviously not going to want to pick one of these up if you have an iPhone, but Android users have an Apple Watch-like device to choose now.

What do you think of the Pixel Watch? Let us know in the comments.