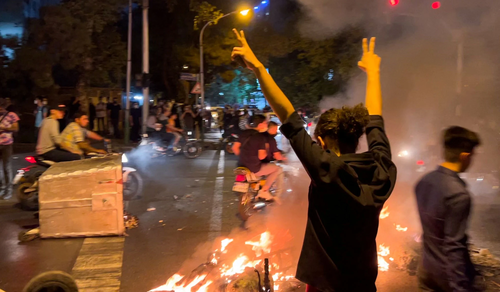 It’s not often these days that the US administration announces it is easing sanctions on Iran, but that’s what the US Treasury Department unveiled on Friday.

It appears a strategy for encouraging protests by freeing up communications and social media platforms. The anti-government protests have now been raging for a full week: “The Treasury Department announced exceptions to Iranian sanctions Friday to allow companies to provide more online services in the country after Iran’s government cut internet access for most of the country amid protests,” The Hill reports.

“With these changes, we are helping the Iranian people be better equipped to counter the government’s efforts to surveil and censor them,” Deputy Secretary of the Treasury Wally Adeyemo explained of the new measure.

Specifically the partial sanctions rollback applies to US and international tech companies which are in a position to help the Iranian population access outside secure platforms and services, in the hopes of the freer flows of information, especially on social media platforms. According to the new US Treasury text:

“As courageous Iranians take to the streets to protest the death of Mahsa Amini, the United States is redoubling its support for the free flow of information to the Iranian people,” said Deputy Secretary of the Treasury Wally Adeyemo. “

“Today, Treasury is announcing the expansion of Iran General License D-2, which will expand the range of internet services available to Iranians. With these changes, we are helping the Iranian people be better equipped to counter the government’s efforts to surveil and censor them. In the coming weeks, OFAC will continue issuing guidance to support the Administration’s commitment to promoting the free flow of information, which the Iranian regime has consistently denied to its people.”

The Islamic Republic reportedly blocked Instagram and other popular sites this week as part of a broadening crackdown on anti-hijab protests in the wake of the death of 22-year old Mahsa Amini.

Burning of #Iran Supreme Leader Khamenei’s statue in his own hometown of Mashhad as protestors chant “death death to Khamenei.” Protests in Day 7 with anger directed at top of regime: pic.twitter.com/6lPzJ5DwI7

The young woman from Iranian Kurdistan reportedly died due to being beaten by police for “unsuitable attire” – or not conforming to Islamic Republic standards of a hijab. She was said to have fallen into a coma after being beaten in police custody. Social media videos have shown protests in various cities spiraling into increased violence, with Western pundits promoting this as a full-on anti-regime “revolution”.

US Treasury action appears to have been hastened after Elon Musk urged a lessening of anti-Iran tech restrictions particularly for Starlink shortly after the protests broke out. Musk said days ago he would pursue an exemption to US sanctions on Iran to supply Starlink internet access to the highly sanctioned Mideast country:

“Internet access is an important tool for protesters and activists in Iran, which blocks many services like YouTube and many foreign media outlets in an effort to impose what the country describes as a halal internet, or one that conforms to its interpretation of Islamic law,” wrote WSJ.

ℹ️ Update: Elon Musk’s call for clarification on sanctions to provide #Starlink LEO satellite technology to #Iran has been approved, with the US Treasury simplifying rules to support internet freedom.

Challenges remain, as seen during the Ukraine invasionhttps://t.co/JMUIUiqAno

The billionaire businessmen suggested he was looking to bring Starlink satellite internet service to Iran at a moment internet speeds were being throttled by Iranian authorities across most parts of the nation as they sought to quell protests:

Earlier this week, Musk announced on the social media service: “Starlink is now active on all continents, including Antarctica.” After reading Musk’s tweet, Iranian-born science reporter Erfan Kasraie then posted his own message to the SpaceX chief.

“I’m sure you won’t answer it Mr Musk, but is it technically possible to provide Starlink to Iranian people?” Kasraie asked. “It could be a game changer for the future.”

Musk did answer Kasraie. He wrote, “Starlink will ask for an exemption to Iranian sanctions in this regard.” The sanctions he commented about are linked to Iran’s nuclear activities. The restrictions bar a wide range of U.S. companies from doing business with Iran.

Tehran has denied the opposition narrative surrounding Amini’s death, describing that she had a heart attack and fell and hit her head. On Thursday the US Treasury sanctioned Iran’s hardline morality police as more and more women take off their headscarves in public displays of defiance.

This man in Iran slapped a woman. He thought he could get away with it. Things are different right now.#IranProtests #Iran #IranianWomenLivesMatter #IranRevolution pic.twitter.com/EJfeHXWzA3

Iranian state TV has confirmed that at least 26 have been killed after a week of clashes with police, but some external rights monitor say it’s actually more. What is clear from emerging and widely circulating videos is that the demonstrations are growing fiercer, triggering a more brutal police and security force response. The Iranian government says that some among the casualties are from security services.