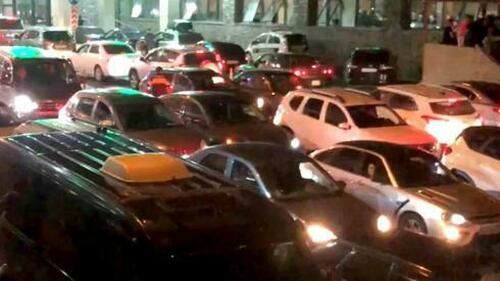 An EU spokeswoman for the European Commission said Thursday that the bloc should give asylum to Russians fleeing the mobilization order, but the EU’s members are not on the same page.

Anita Hipper, an EU spokeswoman for migration, said that the situation is “unprecedented” and said work was ongoing between EU members to find a common approach.

Large queues near the Russia-Georgia border, via BBC.

The Baltic states of Latvia, Lithuania, and Estonia have already come out against giving refuge to Russians who are looking to avoid the draft. On Thursday, the Czech Republic said it wouldn’t grant humanitarian visas for Russians fleeing the mobilization.

“I understand that Russians are fleeing from ever more desperate decisions by Putin. But those running because they don’t want to fulfill a duty imposed by their own government, they don’t meet the criteria for humanitarian visa,” said Czech Foreign Minister Jan Lipavsky.

In Germany, several officials have signaled Berlin would be willing to take in Russians who don’t want to be drafted.

“Deserters threatened with serious repression can, as a rule, obtain international protection in Germany,” said German Interior Minister Nancy Faeser, according to DW.

Under Russian President Vladimir Putin’s order for a partial mobilization, 300,000 reservists will be called up. Russian officials say that 300,000 is just 1% of its reserve force, signaling they could later expand the mobilization.

Putin must be loving the EU countries that’ve made it all but impossible for Russians to get visas and leave—that’s more bodies Putin can draft to kill Ukrainians. Waytago dipshits

The order sparked protests across Russia, leading to the detention of over 1,300 protesters, according to the Russian human rights group OVD-Info.