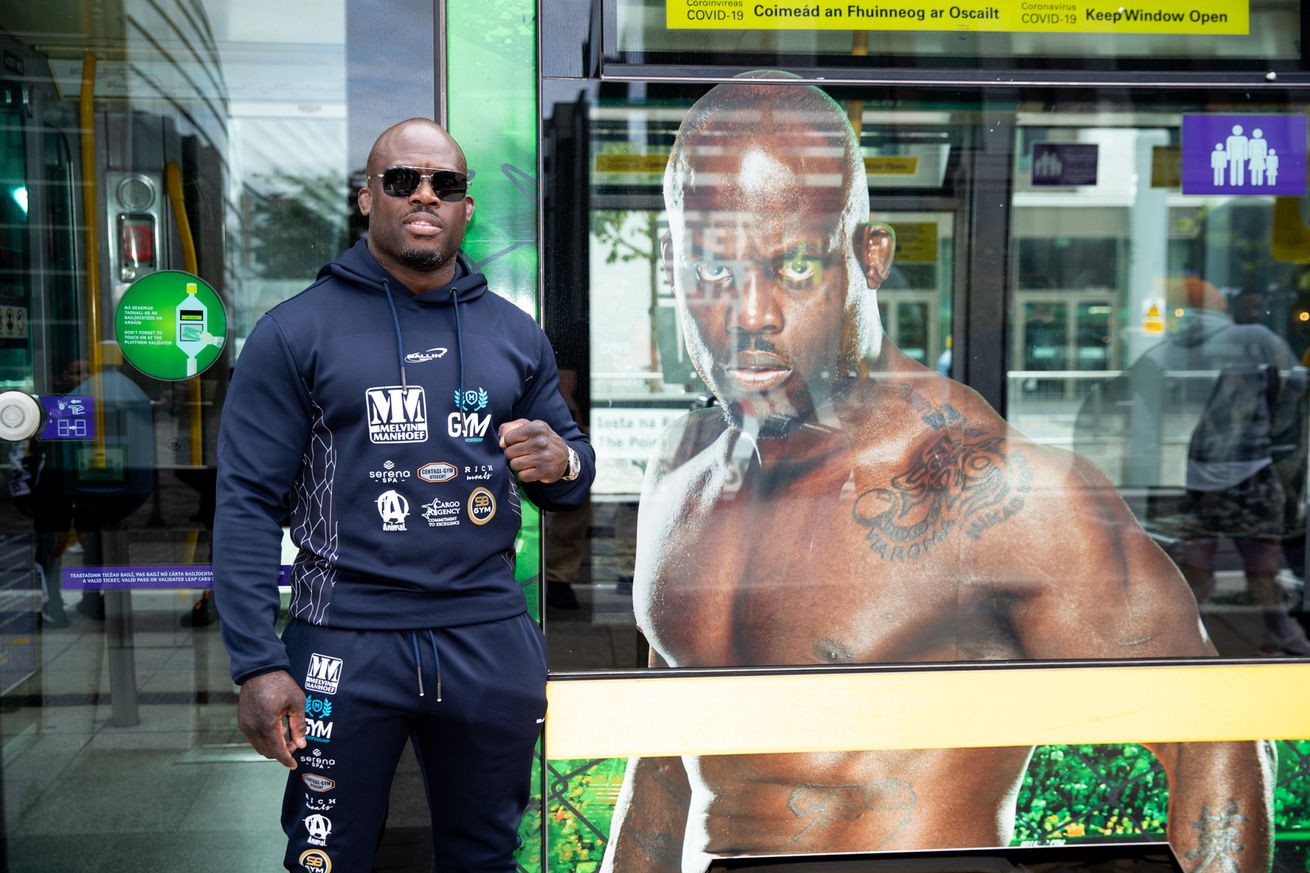 Win or lose, Melvin Manhoef has always gone out with a bang, and the situation is no different as he prepares to compete in MMA for the final time.

Manhoef, 46, takes on Yoel Romero this Friday in the co-main event of Bellator 285 at 3Arena in Dublin, Ireland, a bout that is being billed as the last of Manhoef’s 25-year pro fighting career. Since taking his first fight in December 2015, Manhoef has amassed 32 wins in 50 appearances, with 29 of those wins coming by way of knockout.

MMA Fighting spoke to Manhoef ahead of Friday’s momentous matchup to discuss the vigilante justice he doled out earlier this year, why this is the right time for him to step away from fighting, the most memorable knockouts of his career, the one opponent he wished he could have fought in his prime and, of course, whether this truly is the end.

(Questions and answers edited for grammar and clarity.)

What was the aftermath of you chasing down those burglars back in March?

No, I didn’t get into any trouble. They understand that I did it. It’s not good, but there was nothing wrong. Everybody was saying for this time, they’re going to leave it like this, and for me this was OK.

This will be your last fight. Why now?

It’s the last fight on the contract and I don’t think they’re going to renew the contract. I’m 46 years old and it’s also time to go and let the young kids do other things. I feel good, I feel very good and training camp went good. I’m training with a lot of young guys and they find it’s still hard to fight with me.

It’s a little bit strange. One side of me, I don’t want to stop because I think I can still handle some good guys. I can still knock people out. I knocked people out in this training camp, I knocked a lot of people out, so I’m doing a good thing, I think. One side doesn’t want to stop, the other side has to think about all the damage I take now, I’m getting older, so every punch is going to count for two now. I’m talking normal, everything is OK, maybe I have to keep it like this and be blessed that I have had such a beautiful career.

If you beat Yoel Romero in impressive fashion at Bellator 285, will that make it easier or more difficult to walk away?

Of course, it’s going to make it easier to retire if I knock him out. I don’t know. It’s going to be easy, even if I lose it’s going to be easy to retire. It’s not going to be, like, wait around. This is the fight game. You get hurt sometimes and sometimes you win and you lose sometimes. Everybody knows who I am and what my fight style is. I’m aggressive, I’m coming to knock people out and if it happens it happens, if it don’t, I think I have always entertained the audience.

How do you maintain that connection with the audience after having competed for 25 years?

I think that I always come to fight, I always give it my all. Even though all the fights that I have lost, I was beating everybody up. But for example, I think that people like it when they give their all and go for it. Sometimes, it’s also not wise that I fight like this, but I think people are paying a lot of money, I get paid a lot of money by the promotions, so I have to deliver. You can see this. This is the energy that I give, I think.

Your most recent fight was against Corey Anderson, one of the best light heavyweights in the world, and now you fight Yoel Romero. Was there ever any thought to ask Bellator for a step back in competition for your final fight?

This is what I wanted. It’s the last fight, so come with a bang and go with a bang. This is how it is. I think people are going to enjoy this fight and people are watching very closely this fight, so I think I’ve made a good choice.

Fighting Corey Anderson was also a good fight – and you see, Corey Anderson is one of the greatest fighters. I had a good training camp there, but I don’t know what happened there because I choked a little bit. Even that fight, I’m still proud of myself that I did it and it took him two rounds to finish me. The wrestling took one round, so I hold onto that a little bit, to keep that positive.

Looking back a little further, should this be the last fight as planned: 32 pro wins, 29 by knockout. Is it possible to name the most memorable knockout of your career?

I think the Mark Hunt fight or the Sakuraba fight are the most memorable for me and also the fight with “Cyborg” [Evangelista Santos].

Those three are fights that I keep with me. Sakuraba is one of the legends who built up PRIDE and everything and it was an honor to fight him. Also with Mark Hunt I had the same feeling that he was a K-1 champion and a legend and he had never been knocked out and I did it. These things are special to me.

Seventeen years ago, I fought against Cyborg, and that was also a fight that the crowd was standing [on their feet]. It was a memorable fight for me. Those three fights are very important to me and I really enjoyed them.

Those are the fights I imagine would jump out for most fans as well when talking about your career. You’ve been in there with so many famous names: Hunt, Sakuraba, Gegard Mousasi, Robbie Lawler, Mamed Khalidov. Is there anyone that you wish you had the chance to fight earlier in your career that you missed out on?

Was there ever any chance of that happening?

No, because then he went to the UFC and I went to K-1.

You mention Anderson, what do you think about him boxing Jake Paul?

He can [knock Paul out]. Fight experience is with Anderson, but [Paul] has the youth. He wants to go and he can bang, you saw what he did with [Tyron] Woodley, so you have to take him serious. But I think that Anderson is more skilled and smarter and he has fought more heavy battles, so I think Anderson would manage and I think maybe knock him out.

Heading into this final fight, are you able to look back on the impact you’ve had on fighters from The Netherlands and your native Suriname?

It’s very important that I can motivate other people to do what I love the most. It’s very good for me. It’s also fuel, because I know that people are counting on me. It’s a nice feeling. I have spoken with a lot of people who say that I’m their inspiration, so it’s nice that your work is appreciated.

What’s the most important piece of advice you have for fighters seeking to achieve the kind of longevity that you have?

Believe, man. Be consistent, it’s very important. Keep on being there, keep on training, keep on believing and it will come by itself. You have to invest. You cannot put something in and get it the next day. If you put the seed in the ground, the next day it’s not a tree. You have to wait 10, 15 years, and then you’re going to have a hell of a tree. So invest in yourself is the most important part. Everybody can say, ‘You’re not going to make it.’ Just keep on believing and go.

Are there any mistakes your career you would warn other fighters to avoid?

Sometimes you fight and you didn’t think about health. I had a fight against Remy Bonjasky and then on five days’ notice, I had two liters of blood in my lungs, and after that I still got on the plane to Japan and I still fought [another] fight. This kind of thing is dangerous, but on the other side if you’re a fighter you have to do this kind of thing. So it’s advice that I can give because I’m getting a little bit older, but when I was younger, I was like, yeah, this is part of the deal. This is part of the life.

After Sept. 23, if the right matchup, the right offer comes along, is the door open to fight again?

If the right amount of money is there, then of course the door is open. This is what we do for a living. This is what we do, putting bread on the table. In this moment, I’m very sharp and I’m very healthy, so if it’s going to be a few months later it could be. But it could not be a year later or something like this, it’s not possible.

So a year from now, that’s when you’ll know for sure.

I’m done, I’m done. But if the right amount of money came, then I can do a fight, but it has to be in the next six months. If I have to wait longer, then no, man, I’m almost 47 and that’s good for me.