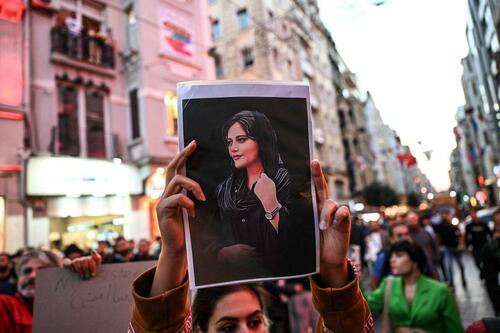 At Least 7 Dead In Iran As Anti-Hijab Protests Grow

A fifth day of protests in Iran have resulted in multiple deaths amid a security crackdown, following the death last week of Mahsa Amini, a 22-year-old from Iranian Kurdistan who reportedly died due to being roughed up by police for “unsuitable attire” – or not conforming to Islamic Republic standards of a hijab.

Iranian officials say seven people have died since protests erupted Saturday, following Amini’s funeral, where women began removing their headscarves in protest, sometimes burning them in public displays of defiance. Demonstrators have decried instances of what they say is ‘live fire’ tactics and deadly forced used by police to disperse the protests, which have now spread across several provinces.

New Arab/Getty Images: Mahsa Amini was reportedly bludgeoned repeatedly against a wall after she was detained for showing too much hair.

At least one of the dead has been reported as a security member, coming also amid hundreds of arrests. “Crowds cheered when women burned their hijabs on a bonfire in Sari on Tuesday, the fifth successive day of unrest,” BBC has reported of scenes coming from the country Tuesday. “Activists said a woman was among three protesters shot dead by security forces in Urmia, Piranshahr and Kermanshah.”

Dozens of videos showing fierce anti-hijab protests, as well as chants against the country’s ‘morality police’ have been circulating widely on the internet.

According to a description of some of the viral protest videos reviewed by The New York Times:

Protesters have been calling for an end to the Islamic Republic, chanting things like “Mullahs get lost,” “We don’t want an Islamic republic,” and “Death to the supreme leader.” Women have also burned hijabs in protest against the law, which requires all women above the age of puberty to wear a head covering and loose clothing.

The scenes in Iran are astonishing. How far will these protests go?
pic.twitter.com/AJeHB0yyYB

⚠️ #Iran is now subject to the most severe internet restrictions since the November 2019 massacre.

Meanwhile, the circumstances surrounding Amini’s death have been contested, with authorities painting a narrative of a girl brought into custody who then suffered a heart attack:

There were reports that police beat Ms Amini’s head with a baton and banged her head against one of their vehicles, Acting UN High Commissioner for Human Rights Nada al-Nashif said.

The police have denied that she was mistreated and said she suffered “sudden heart failure”. But her family has said she was fit and healthy.

For good measure I’m also tweeting the video that Iranian state TV has published. They say the woman had a heart attack and was not beaten. There’s no doubt western agencies and media want to portray Iran in the worst light possible. Keep that in mind. pic.twitter.com/jlvfaZZen3

In his UN General Assembly address Wednesday, at a moment his government is facing international criticism including by Biden himself at the assembly meeting, Iranian President Ibrahim Raisi decried the West’s ‘double standard’, saying “human rights belong to all but unfortunately this is trampled upon by many governments,” and cited the example of “the native tribes of Canada, whose bodies of hundreds of their children were discovered in mass graves in a school.”

The Iranian leader claimed further before the assembly, “We are defenders of a fight against injustice in all of its forms, against humanity, against spirituality, against the almighty, against the people of the world, no matter where it may occur.”