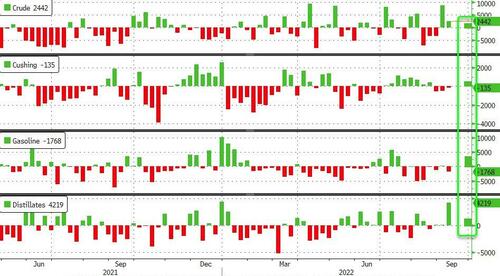 “Macro-economic pressures from the Federal Reserve set to raise interest rates this week has added pressure back on the US stock market which seems to be capping crude prices,” said Dennis Kissler, senior vice president at Bok Financial Securities.

“Near term, prices are vulnerable to the Fed’s rate rises and more Strategic Petroleum Reserve releases scheduled through November.”

The potential for increased supply has also weighed on the outlook. The US said Monday it would offer an additional 10 million barrels of oil from its strategic reserves in November, ahead of plans by the European Union to ban Russian crude in December.

Crude stocks rose for the 3rd straight week, and there were inventory builds across the board according to API

WTI was hovering around $84.25 ahead of the API print, and dipped lower after the data…

“A strong U.S. dollar, rising yields and concerns over demand as the global economy slows is weighing on crude oil prices again,” said Michael Hewson, chief market analyst at CMC Markets UK. Markets are gearing up for “multiple rate hikes this week from the Federal Reserve, Bank of England and Swiss National Bank,” he said.

“Fears over tight [oil] supply aren’t having the supportive effect on prices that [we] would normally expect, however it also means they probably won’t dip too far either.”