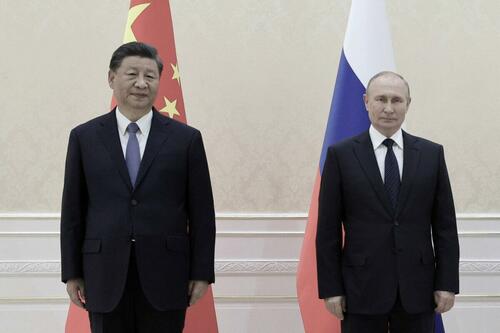 Authored by Jessica Mao via The Epoch Times,

A top Chinese official has expressed support for Russia’s war in Ukraine during his visit to Moscow, apparently believing it was a closed-door meeting. But the Kremlin released the footage to make his remarks known to the entire world.

Li Zhanshu, the third most important Chinese Communist Party (CCP) figure and a member of the Standing Committee of the Politburo, visited Russia from Sept. 7 to 10 before Chinese leader Xi Jinping met with Russian President Vladimir Putin in Uzbekistan on Sept. 15.

Li met with Putin in Vladivostok and later with Vyacheslav Volodin, chairman of the State Duma, and Valentina Matviyenko, chairwoman of the Federation Council, in Moscow, along with leaders of the five political parties of the State Duma.

His low-profile visit to Russia did not attract much attention until a video went viral on social media platforms such as Twitter, causing public outcry.

“With the United States and NATO now at Russia’s doorstep, it has become an issue concerning Russia’s national security and the lives of its people,” Li claimed.

“Under such circumstances, Russia takes some measures that it deems appropriate, and China fully understands the necessity of all the measures taken by Russia aimed at protecting its key interests. We are providing our assistance.”

As Li is also a close ally of Xi, his statement is considered to represent the CCP leader’s stance. It is widely believed that this is Beijing’s strongest and most explicit statement supporting Moscow.

Li’s remarks were first published in a text on the official website of the State Duma on Sept. 9. Shortly afterward, footage with the mark “Duma” in Russian was released.

In contrast, Chinese state media kept mum on Li’s remarks supporting Russia’s war in Ukraine and merely reported that Li “thanked Russia for its firm support to China on the Taiwan issue.”

Analysts believe that Moscow deliberately publicized Li’s remarks ahead of the Xi-Putin meeting in a bid to pressure the CCP to voice its support of Russia, thus putting Beijing in an embarrassing position.

Seeing Through the China-Russia Alliance

Yang Si, a Japan-based current affairs commentator, told The Epoch Times on Sept. 16 that Beijing and Moscow are exploiting one another.

“There is no doubt that the CCP is supporting Russia, but it has never said so publicly,” Yang said.

“Li’s statement this time was not a public statement either; it was behind closed doors. I guess Li did not expect Russia to make it public. Russia probably thought written reports were not enough, so they directly released the original video, which is tantamount to forcing the CCP to openly state its support for Russia’s war in Ukraine. Russia and the CCP are two gang groups. They have no common beliefs, nor do they have any morality. In short, they just exploit each other.”

“The CCP has done a lot of things behind the scenes, but now they are all exposed. The Russian army invaded Ukraine, and the CCP’s support for this war will naturally make other nations believe that the CCP may take similar actions against Taiwan. They will be on high alert watching the CCP’s actions in the Taiwan Strait,” Lu said.

She believes some countries on the sidelines will see the CCP clearly through Li’s remarks. “It will accelerate the pace of a global rejection and deterrence of the CCP,” she said.

US and Europe Pass Bills to Support Taiwan

China expert Chen Pokong said in a YouTube program on Sept. 16 that the exposure of Li’s statement would help the United States and the European Union pass bills to support Taiwan and fight against the CCP.

On Sept. 15, the European Parliament overwhelmingly passed a resolution denouncing China for continued military action and provocations against Taiwan and calling for the EU to “assume a stronger role when it comes to the situation in the Taiwan Strait and the Indo-Pacific as a whole.”

The resolution, jointly sponsored by five major parties in the European Parliament, contains 26 propositions. It commended the Taiwanese government and political leaders for their prudent and responsible response to the CCP’s provocative actions. It urged the EU to strengthen its political engagement with Taiwan. Furthermore, the European Parliament will continue to send representatives to Taiwan on official visits to deter the CCP’s ambition to attack Taiwan.

The European Parliament also believes that the EU should seek joint investment cooperation with Taiwan’s New Southbound program to counter the CCP’s global gateways—the Belt and Road Initiative (BRI, also known as “One Belt, One Road”).

In addition, the European Parliament suggests that the European Commission change the name of the European Economic and Trade Office (ETO) in Taiwan to reflect the broader relationship between the two sides.

Before that, the Senate Foreign Relations Committee of the U.S. Congress passed the Taiwan Policy Act of 2022 on Sept. 14. The bill is considered the most comprehensive reorganization of U.S. policy toward Taiwan since the Taiwan Relations Act of 1979.

It proposes $4.5 billion in military assistance to Taiwan over four years and an increase of $2 billion in the fifth year. The bill also includes a congressional proposal to rename the Taiwan Representative Office to the United States and designate Taiwan as a “major non-NATO ally.”

The bill also proposes that the United States establish “a robust sanctions regime to deter further PRC [People’s Republic of China] aggression against Taiwan,” along with detailed sanctions plans.