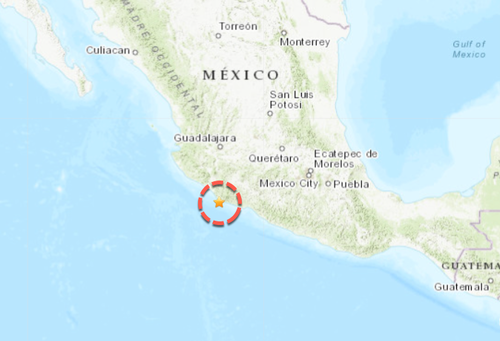 A powerful earthquake has been detected 25 miles south-southeast of La Placita de Morelos, a small town in Michoacan, Mexico, near the Pacific coast.

Bloomberg reported buildings in Mexico City shook as a result of the earthquake.

Less than an hour after a nationwide earthquake drill in Mexico City, the ground actually started shaking. Everyone here tells you, “beware of September 19.” 1/ pic.twitter.com/XqyOdMVNR4

So far, there’s no report of damage in Mexico City.

*MEXICO CITY MAYOR SAYS NO REPORTS OF DAMAGE YET AFTER QUAKE

The Pacific Tsunami Warning Center has issued a tsunami alert for nearby coastlines.

“Based on the preliminary earthquake parameters, hazardous tsunami waves are possible for coasts located within 300 km (186 miles) of the earthquake epicenter,” the center said.