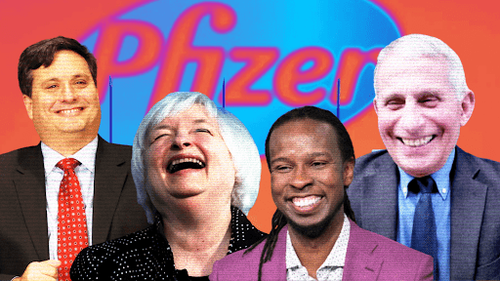 Authored by Raheem J. Kassam and Natalie Winters via The National Pulse,

The September 21st to 23rd Atlantic magazine festival will take place at the Wharf in Washington, D.C., with tickets going for a cool $400.00 per person. Topics are set to include critical race theory, diversity, Ukraine, censorship, climate change, and centralizing healthcare and pandemic response control.

Fauci – who has overseen most of America’s COVID-19 response in his role as the Director of the National Institute of Allergy and Infectious Diseases – has long been the subject of “fact checks” by corporate media sources such as Reuters, which deny his links with Big Pharma group Pfizer. The chairman and former Chief Executive Officer (CEO) of the Thomson Reuters Foundation– James C. Smith – is a top investor and board member for Pfizer, as The National Pulse revealed in December 2021.

Pfizer vaccine studies have also shown adverse effects on the health of its recipients, including altered menstrual cycles in women, lowered sperm count in men, and cardiovascular problems in children and young adults. Despite the flaws – or perhaps because of them – the company hired a record-breaking number of politically connected lobbyists to help advance vaccine mandates.

The second day’s programming includes a panel on “misinformation”, underwritten by the Boston Consulting Group, and starring TikTok’s “Misinformation Researcher” Abbie Richards, as well as Louis Jacobson from the partisan “fact checker” Politifact. Richards is unlikely to be quizzed on recent revelations that dark money Democrat groups are paying for misinformation to be spread on her Chinese Communist-owned platform by leading Obama acolytes.