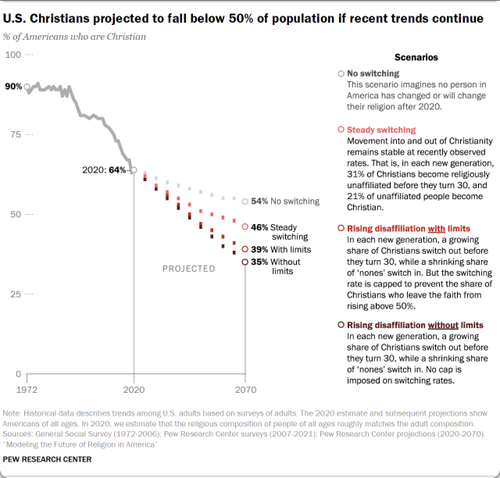 America has been a majority Christian nation since its founding nearly 250 years ago. And while it’s still the dominant religion, a new study reveals if the shrinking Christian majority trend persists, Christians could make up less than half the US population by 2070.

In a newly commissioned study, Pew Research Center found that Christians accounted for 90% of the US population 50 years ago but plunged to just 64% in 2020.

“If recent trends in switching [changing one’s religious affiliation] hold, we projected that Christians could make up between 35% and 46% of the US population in 2070,” Stephanie Kramer, the senior researcher who led the study, told NPR.

Kramer developed four scenarios that show how Americans who don’t belong to any religion will be the majority by the end of this century. And in every scenario described below, there’s a steep decline in Christianity.

She offered some theories behind the decline:

“Some scholars say it’s just an inevitable consequence of development for societies to secularize. Once there are strong secular institutions, once people’s basic needs are met, there’s less need for religion.”

“Other people point out that affiliation really started to drop in the ’90s. And it may not be a coincidence that this coincides with the rise of the religious right and more associations between Christianity and conservative political ideology.”

Pew found as Christian numbers trend down, the percentage of people identifying as “religiously unaffiliated” is inversely rising and could become a majority in the decades ahead.

“That’s where the majority of the movement is going,” she said. “We don’t see a lot of people leaving Christianity for a non-Christian religion.”

Another study via Pew showed that 31% of the world’s population identifies as Christan, closely followed by Muslims at 25%. Jews have the smallest population of major religions, with only 0.2% of the world identifying as Jewish.

An increasingly unaffiliated population could reshape the country’s religious landscape in the coming decades. This might also affect the values and beliefs of core government institutions that were built on Christianity.