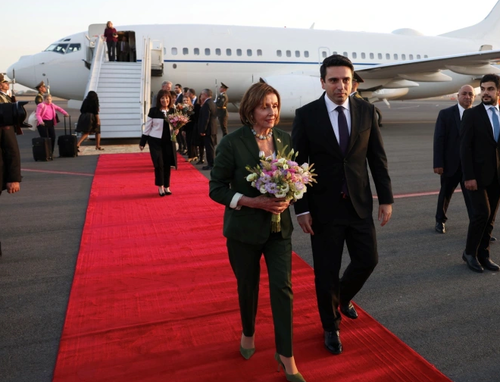 US House Speaker Nancy Pelosi has condemned Azerbaijan’s recent “illegal” attacks on Armenia in Sunday remarks from Yerevan, where’s she’s been since her arrival on Saturday.

Her trip, coming after over 200 soldiers on both sides have been killed in border clashes going back to last Tuesday, makes her the highest ranking American official to visit Armenia since its independence from the Soviet Union in 1991.

Pelosi arrives in Yerevan, Armenia on Saturday, via Government of Armenia.

Ahead of her three day visit, she described her trip as being “a symbol of Washington’s commitment to a peaceful, prosperous and democratic Armenia, and a stable and secure Caucasus region,” according to the AFP.

“We strongly condemn those attacks,” she emphasized. According to a further description of her remarks in Reuters, “Pelosi, who angered China with a trip to Taiwan last month, said it was clear that the border fighting was triggered by Azeri assaults on Armenia and that the chronology of the conflict should be made clear.”

Pelosi also visited the Armenian Genocide Memorial on the hill of Tsitsernakaberd in Yerevan, where she reportedly shed tears and gave remarks blaming Azeri aggression for the recent deaths and flare-up of fighting which have threatened to expand into broader war…

Pelosi cries as she visits Armenian Genocide monument and then condemns Azerbaijan’s recent attacks to Armenia as “illegal” pic.twitter.com/8j3qOtKeBJ

The perhaps awkward irony of the geopolitical situation is that Russia is also tiny Armenia’s powerful ally; however, parliamentary speaker Simonyan and government leaders are said to be angry at the lack of positive response from Russia when Yerevan last week requested military assistance based on prior existing treaties.

At the same time, the United States actually provides limited military aid to Azerbaijan, which recently some Congressional leaders have fiercely pushed back on.

A big impediment to Azerbaijan’s plans is that Armenians have an influential and well-liked diaspora, not only in America but also important European and Middle Eastern countries. It makes it that much harder to normalize a war against Armenia. https://t.co/kA2yBRDhmw

Some observers have noted that her trip, as she tries to play “peace-maker” ahead of key upcoming midterm elections in the US, could be decisive in allowing a ceasefire to hold permanently, given Baku will perceive that global opinion is on Armenia’s side. Though it remains that Azerbaijan has powerful backers too – most notably Turkey’s Erdogan.