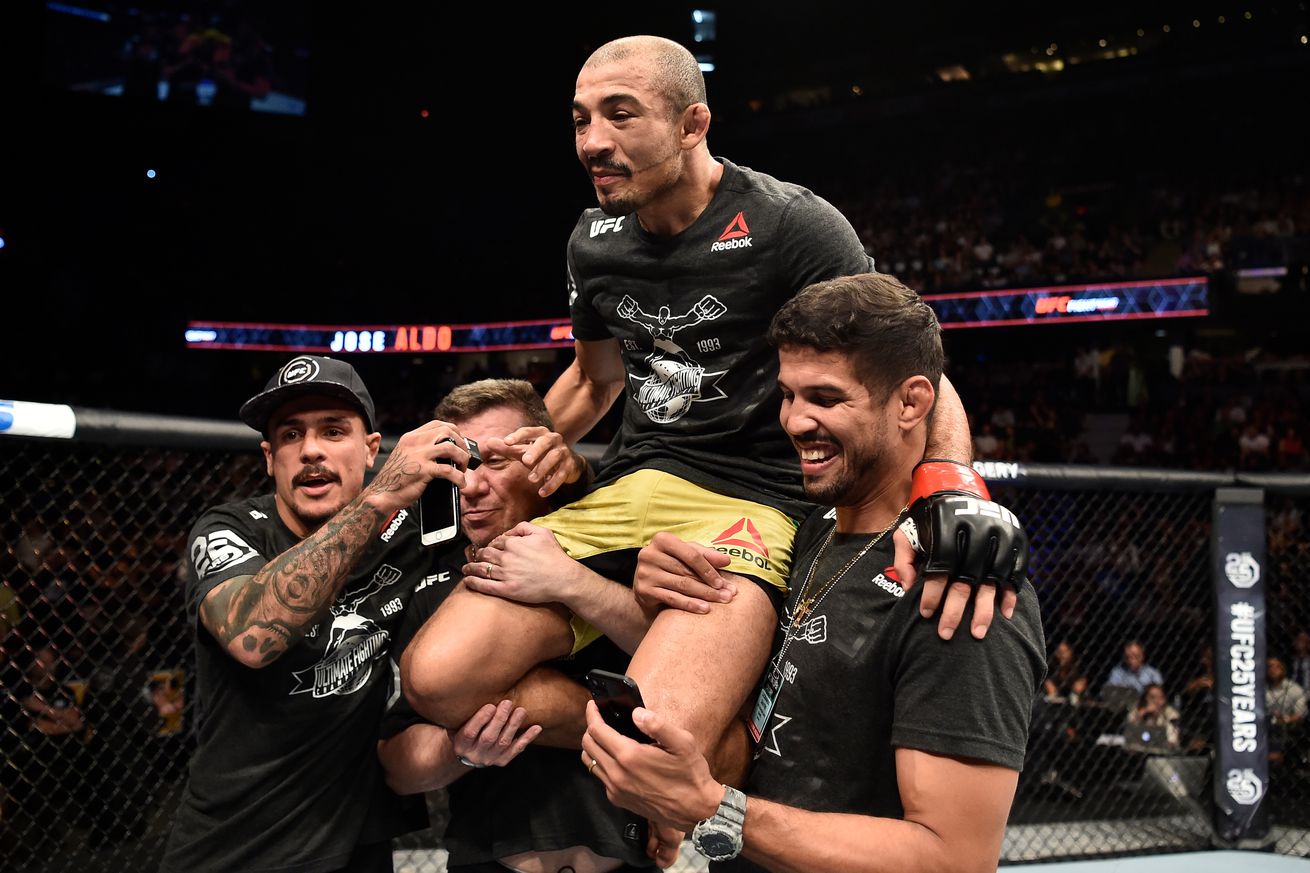 Jose Aldo’s impact on the MMA world will be felt for ages.

Following the news that Aldo has retired from MMA competition after a legendary 18-year fighting career, the MMA community took to social media to pay respects to the Brazilian legend. Aldo, 36, is widely regarded as the best featherweight of all time, a pound-for-pound great, and a pioneer among the lighter weight classes.

Check out the reactions to Aldo’s retirement below.

The King of RIO! What a career brother! Go enjoy retirement brother. Eat some açaí with cashew and powder milk for me @josealdojunior

I always wonder what could’ve been. I spent a whole camp training to fight Jose Aldo in Brazil, but COVID changed everything. I was looking forward to the challenge & crazy atmosphere.

Happy retirement to one of the greatest featherweights in MMA history @josealdojunior pic.twitter.com/I4fHHLBMgc

What an amazing career @josealdojunior had, watching him smash people to bits in his swim shorts is one of the things that inspired me to get into mma, legend pic.twitter.com/u28keQUcIR

Obrigado & Parabéns to the legend, the kindest, THE King of Rio @josealdojunior https://t.co/DcPlSLKTsx

If it’s true that he retired.@josealdojunior you’re one of my favorite fighters and an absolute legend. Enjoy retirement, thank you for all the memorable moments

Happy retirement to Jose Aldo one my favorite fighters growing up

Don’t know if this is it, but If so was a pleasure meeting and training with @josealdojunior 2015 on tuf – absolute legend @fightpicsgohard pic.twitter.com/6iDrsTOTP3

I’m so glad I got to see one of his fights and walkouts live. One of the GOATS of MMA. What a career. https://t.co/1kiQVdduEw

One of the best to ever do it. Put the featherweight division on the map https://t.co/VDOak2nX9s

23-year-old José Aldo. A deadly combo of speed and skills far ahead of his time. The featherweight GOAT and one of the greatest fighters MMA has ever seen. NINE title defenses, not seven. Mark that down in his HOF induction. @josealdojunior pic.twitter.com/Jsv9U9w5oj

The featherweight GOAT. One of the greatest fighters of all-time. Champion of the world for 2,215 consecutive days in his prime. One of the last men standing from an era of poster curses and Powerman 5000. The word “legend” does not do enough to describe the career of Jose Aldo. https://t.co/qBUN8dzW40

What a , enjoy retirement @josealdojunior thanks for all the memories before & while I grew up in the sport https://t.co/aDbjB07ulz

Aldo was someone who I could just watch film on over and over and always learn something new. He ruled over the featherweight division. Even when he began to decline, he continued to be competitive at the top of the bantamweight division for years. Thank you @josealdojunior https://t.co/hHyTS9oTAb