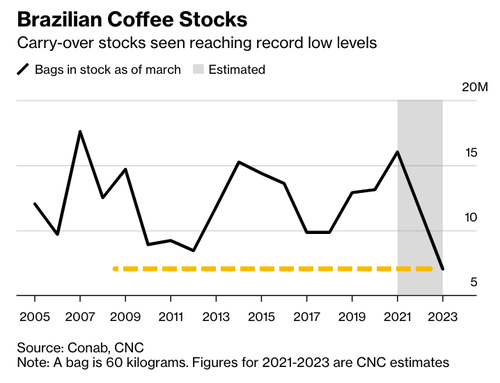 How much are consumers willing to pay for a cup of coffee?

Bloomberg quoted Silas Brasileiro, president of the National Coffee Council, who said inventories in the South American country could decline to just 7 million bags (each weighing 60 kilograms) by the end of 1Q23. Brazil usually has 9-12 million bags in inventory.

Readers have been well informed regarding the global supply deficit of arabica coffee beans, which has materialized over the last few years. Recall “Arabica Stockpiles Experience Largest Plunge Since ’98 Amid Severe Shortage” and “Arabica Coffee Set For Largest Annual Increase Since 1994” because multiple years of a weather phenomenon known as La Nina have produced adverse weather conditions in the country’s top growing regions.

Stockpiles “are so low that even if we have a good crop next year, Brazil may just barely have enough to serve demand,” said Nelson Carvalhaes, a board member of exporters group Cecafe.

Tight global supplies have doubled arabica coffee futures in New York since 2020. Prices have traded in a lateral pattern for most of 2022 between $2-$2.5 per pound.

“We continue to increase safety stock on key items,” CEO John Butcher told Bloomberg about one year ago.

In Colombia, the world’s second top arabica coffee producer, crops are drowned in too much rain due to persisting La-Nina-related conditions. Yields are expected to decline in Guatemala, Honduras, and Nicaragua, while Vietnam, the largest robusta supplier, will also see stockpiles tumble because of poor harvest.

Analyst Natalia Gandolphi from hEDGEpoint outlined this will be the second year of declining global stockpiles with increasing demand.

Given the worsening global supply situation, there’s no immediate relief as higher demand indicates arabica prices should move higher. Consumers will find robusta a cheaper alternative to arabica, but even then, all bean quality might move higher.

Good luck to the central banks, who believe they can solve food inflation and overall inflation by crushing demand through higher interest rates.