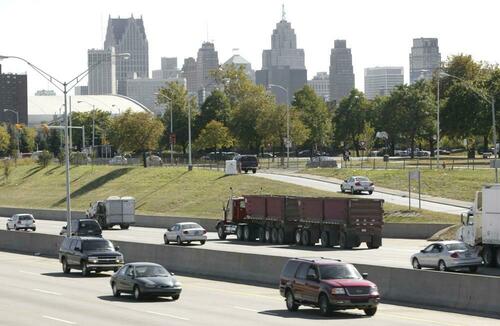 The Biden administration has allocated more than $100 million out of last years’ bipartisan infrastructure bill to dismantle a mile-long highway in Detroit, MI which has been long-deemed racist.

The freeway, I-375, was once the shortest in America (before I-110 in El Paso, Texas was built). Completed in 1964, the freeway was built through a historic district known as Black Bottom, which was home to a community of black-owned businesses that had become run down by the 1950s and 1960s – attracting lower-income residents who lived in overcrowded housing units.

Racial justice advocates say the freeway was constructed to facilitate ‘white flight’ and deprive black communities of housing and commercial opportunities, as more than 100,000 black residents were displaced by a barrier between downtown Detroit and communities to the east.

On Thursday, Transportation Secretary Pete Buttigieg told the Associated Press that $106.4 million in federal funds, which will allow Michigan to move forward on its $270 million effort to transform the stretch into a street-level boulevard. The project will reconnect surrounding neighborhoods and add bike lanes.

This is not parody. pic.twitter.com/bzbplAnfqO

That said, some have warned that Michigan’s plan to build a six-lane city boulevard risks replacing one busy roadway with another – while many longtime black residents worry they may be priced out of the city as the improvements will lead to gentrification.

The highway removal is slated to begin as soon as 2025, two years sooner than expected, with construction finishing by 2028.

“This stretch of I-375 cuts like a gash through the neighborhood, one of many examples I have seen in communities across the country where a piece of infrastructure has become a barrier,” Buttigieg told AP, before joining Michigan Gov. Gretchen Whitmer and Detroit Mayor Mike Duggan later in the day to highlight the grant.

“With these funds, we’re now partnering with the state and the community to transform it into a road that will connect rather than divide,” said Buttigieg.