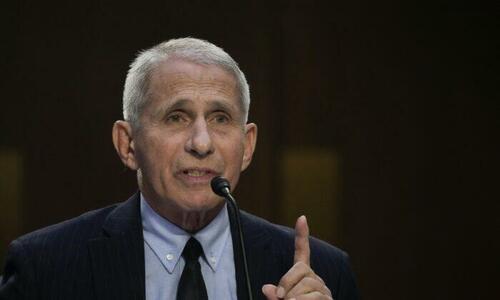 Dr. Anthony Fauci said Sept. 14 that he and his staff members have handed over all responsive documents to a lawsuit alleging the U.S. government colluded with Big Tech to censor social media users.

“I have handed and my staff have handed over every document that the Department of Justice has asked for, and it’s up to them to make it available, but I have held nothing back from anything that I was asked to provide,” Fauci said during a Senate hearing in Washington.

Dr. Anthony Fauci, director of the National Institutes of Allergy and Infectious Diseases, testifies during a Senate hearing in Washington on Sept. 14, 2022. (Drew Angerer/Getty Images)

The attorneys general of Missouri and Louisiana filed the suit in May, and the first tranche of discovery returned evidence of collusion, including emails between the federal officials at the Centers for Disease Control and Prevention and the White House and officials at Facebook parent company Meta, Google, and Twitter.

Absent from the release were any messages from Fauci and just a few involving officials at the agency he directs, the National Institute of Allergy and Infectious Diseases.

“First, the requested information is obviously very relevant to Plaintiffs’ claims. Dr. Fauci’s communications would be relevant to Plaintiffs’ allegations in reference to alleged suppression of speech relating to the lab-leak theory of COVID-19’s origin, and to alleged suppression of speech about the efficiency of masks and COVID-19 lockdowns,” Doughty said.

The judge ordered the government on Sept. 6 to produce the requested Fauci records to plaintiffs within 21 days.

“Any communications that are made in that regard as far as I’m concerned are an open book and available,” Fauci said during the Senate hearing.

The Department of Justice and NIAID did not return requests for comment.

Several emails between them sent in 2020 were released in 2021 through a Freedom of Information Act response.

Zuckerberg asked whether he could provide resources to “potentially accelerate” the COVID-19 vaccines, which were still in development at that time. Fauci thanked him and said that “I believe we will be OK.”

“There was one communication or two perhaps with Mark Zuckerberg in which he emailed me and wanted to know if there was anything he could do,” Fauci said under questioning by Sen. Mike Braun (R-Ind.) in July 2021. “It was mostly propagating a public health message, it had nothing to do with the origins of the virus at all.”

Braun asked if Fauci consults with social media companies frequently, and Fauci said no. Fauci also said he was “not sure” whether he had Zuckerberg’s cell phone number.

The discovery produced so far in the lawsuit shows that Zuckerberg provided Fauci with the number, according to a joint statement by plaintiffs and defendants.

2022.10.03
Aaron Pico vows ‘I will be champion one day,’ reveals first punch dislocated shoulder at Bellator 286