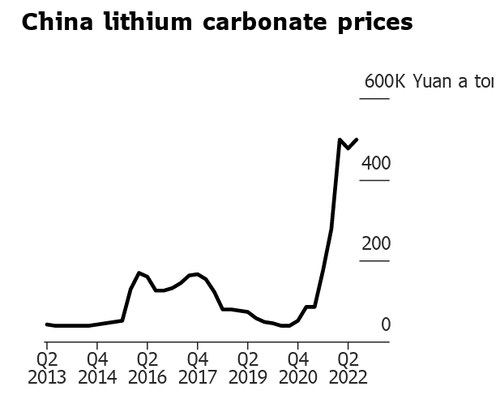 While California banned the sale of new gas-powered cars by 2035, and the Biden administration unveiled $900 million in new funding to build electric vehicle charging stations, rising lithium prices could derail the EV revolution.

The progressive view is that EVs will save the planet from catching on fire because green vehicles would eliminate the harmful carbon emissions of fossil fuel vehicles. Though a widespread rollout of EVs depends on affordability, and EVs are way more expensive than gas-powered.

Bloomberg reported lithium carbonate, a key metal in EV batteries, hit a new record high in China this week. Per ton, prices jumped to 500,500 yuan ($71,315), more than triple the price versus last year.

A steady increase in demand for global EVs combined with a recent power crunch in Sichuan province, a region that produces 20% of China’s lithium production, resulted in the disruption of output and tighter supplies, hampering an already-squeezed global market.

“This could lead to new power shortages and hit lithium operations,” it noted, expecting lithium prices to stay elevated for the rest of the year.

The expectation that EVs would become affordable for the masses is a distant pipedream because of the high costs associated with battery production.

At least half of an EV battery includes lithium, nickel, manganese, and cobalt, four metals that have surged this past year. Also, let’s not forget China controls the world’s rare earth mineral trade…

The surge in lithium prices and other critical metals for EV batteries is a significant concern that could derail the EV revolution due to affordability concerns.