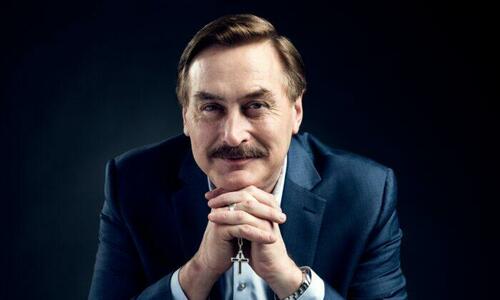 “I Got Bad News For You”: Mike Lindell Speaks Out After FBI Seizes Phone

Authored by Eva Fu via The Epoch Times (emphasis ours),

MyPillow CEO Mike Lindell was picking up food at a fast food chain drive-through when three cars driven by federal agents blocked him.

Mike Lindell’s autobiography came out in 2019 highlights his road to recovery. (Courtesy of Mike Lindell)

It was Sept. 13 afternoon in Mankato, Minnesota. Lindell and a friend were halfway back from a duck hunting trip in Iowa.

As one car pulled up perpendicularly in front of his car, a second pulled up alongside; and a third then appeared from behind, sandwiching Lindell’s car in the middle.

Lindell stuck his head out of the car window. “Who are you guys?” he asked.

The agents identified themselves as the FBI. “We just wanted to talk to you,” they said, Lindell recounted in an interview with The Epoch Times.

The FBI, he said, targeted him over the voter fraud allegations he has voiced, and later seized his cell phone despite his vocal protests.

In what might have lasted between half an hour and 45 minutes, Lindell’s food ran cold and his ice cream malt melted as the FBI agents questioned his proof to back up the election fraud allegations. Among other lines of questioning were Lindell’s ties to Colorado Mesa County clerk Tina Peters, the local election overseer he met at a cyber symposium he hosted last August. Peters has faced charges related to a breach of security protocols for her county’s voting systems, to which she pleaded not guilty last week.

They asked him about his meeting with Ohio math teacher Douglas Frank, who also believes the 2020 presidential election results were manipulated, and about Lindell’s frequent air travel.

“Well, I got bad news for you: we are going to take your cell phone,” Lindell remembered the agents saying.

“No you are not, I’d rather be arrested, you are not going to get my phone,” he replied. Since he doesn’t have a computer, he said his phone was an essential device that he leans on to run his five businesses.

“They want people to be scared to talk to Mike Lindell,” Lindell, who relented and handed over his phone after consulting his lawyer, told The Epoch Times on Wednesday.

“You might get your phone taken at a drive-thru restaurant, you might get your door bashed in by the FBI,” he said, noting the string of FBI subpoenas for allies of former President Donald Trump reported in recent weeks.

While Lindell initially thought the FBI was interested in him as part of the House probe into the Jan. 6 Capitol breach, the agents told him they had two separate cases in which he is named.

The search warrant the FBI handed him authorized the seizure of an extensive list of information on Lindell’s phone, some of which appeared to be related to the tampering of the Dominion voting machines since Nov. 1, 2020, including information relating to the “damage to any Dominion computerized voting system” or” attempt to impair the integrity or availability” of the system.

The FBI turned down Lindell’s request to back up his phone. “That was something that really upset me,” he said, adding that his last phone backup was from a couple of weeks earlier.

But the recent FBI actions, he said, won’t dissuade him from his advocacy efforts.

“The government weaponized the FBI, trying to scare me, trying to scare other people, but it didn’t change a thing,” he said. “This is Gestapo in Nazi Germany. This is what we’re up against.”

Regarding his phone, Lindell is confident that the FBI will realize “there’s nothing in here.”

“I do all things by calls, I rarely text, and I never email,” he said. “So whatever they’re looking for, they’re going to be on a wild goose chase.”

Lindell’s lawyer is working to get his client’s phone back, and meanwhile, Lindell says he has already moved on.

“I’m not even thinking about that. I’m thinking of what I have to do tomorrow, the next day, and the next day,” he said. “I have three huge speeches this week: One in Omaha, Nebraska, one in Idaho, and then with the President, our real president, in Ohio,” he said, referring to Trump. The phone confiscation, he said, has given him the opportunity to tell people that without election integrity, “We lose our country.”