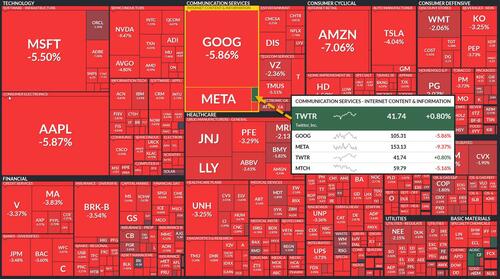 Virtually no one was spared from today’s marketwide carnage which saw absolutely every Nasdaq stock close red for the first time since March 2020, but there was one green outlier against the sea of red: Twitter shares rallied as much as 2% Tuesday, moving closer to the $54.20 deal price, and closed up 0.8% after whistle-blower Peiter Zatko testified before US Senate Judiciary Committee.

And while the kangaroo court hearing served to satisfy grandstanding politicians, it failed to address the elephant in the room, namely spam accounts, or to otherwise have major revelations that would be construed as a breach of a merger agreement, boosting investors’ bets that Twitter may prevail in the dispute against Elon Musk, merger arbitrage specialists quoted by Bloomberg said.

Meanwhile, also on Tuesday, TWTR shareholders approved the proposed buyout plan, putting the final outcome of the deal in the hands of the Delaware Court judge.

Here are what merger arbitrage specialists are saying:

“Mr. Zatko’s testimony, while painting a picture of Twitter’s management that is disorganized and unwilling to put data security above revenues, did not have a smoking gun or show fraudulent activity going on a Twitter. Furthermore, Mr. Zatko did not touch on the subject of spam accounts in any material way. This probably explains why TWTR is trading up after the hearing.”

The Senate Hearing on September 13 primarily focused on whether security issues at TWTR represent a national security risk, and the user data vulnerability. There was no mention of bots or the pending transaction with Musk
We see the hearing as having neutral impact on the TWTR and the Musk litigation. The likely outcome of the hearing would be for the Senators to cite Zatko’s report when pushing for the data privacy legislation and proposals to regulate social media
In the context of the TWTR trial, Zatko is likely to have a credible presence if he testifies in court, but it is notable that bots and spam fall outside of his area of expertise. His testimony is likely to center, as it did in Congress, on TWTR’s inability to track data effectively and the misalignment of the executives’ financial incentives

While Zatko had scathing things to say about TWTR and its controls and safeguards, the question remains how could this derail the deal. The most troubling was the culture of misrepresentation and lying, Zatko alleged, which could be used by Musk’s lawyers
Most investors are glad this event is behind us and that there was no material adverse effects alleged. The whistle-blower compliant is not an issue that is going to see resolution or penalties any time soon and that under existing legislation and regulation TWTR is liable for a deal-breaking amount