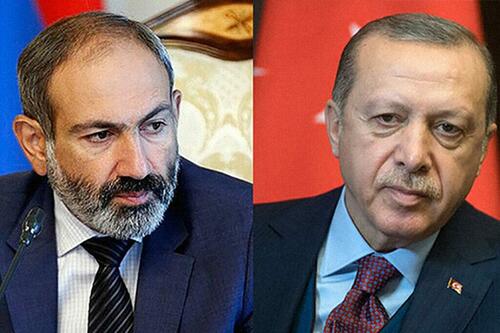 Armenia has announced Tuesday that at least 49 of its soldiers have died in overnight fighting as the country tries to stave off an invasion by the Azerbaijan military. Azerbaijan has instead claimed that it came under attack by Armenia, which staged “sabotage” operations on its border.

Armenia identified multiple towns on its eastern border with Azerbaijan, including Jermuk, Goris and Kapan, as being heavily shelled as part of a large-scale provocation by Azerbaijan which began shortly after midnight. “The intensity of hostilities has decreased but attacks on one or two fronts from Azerbaijan continue,” Armenian Prime Minister Nikol Pashinyan informed parliament during a speech.

As we detailed earlier, Pashinyan held a phone call overnight with President Vladimir Putin wherein Russia was urged to send military assistance based on the shared Collective Security Treaty Organization, or CSTO.

This has raised fears that another major regional war could break out involving Russia. Like with the Sept.-Nov. 2020 war over disputed Nagorno-Karabakh, Turkey has been quick to jump in behind Azerbaijan, saying it “continue to stand by Azerbaijan and will never leave it alone,” Turkish Foreign Minister Mevlut Cavusoglu said Tuesday.

Amenia should cease provocations and instead focus on peace negotiations and cooperation with Azerbaijan, Foreign Minister Mevlüt Çavuşoğlu said on Tuesday amid renewed conflict between the two ex-Soviet countries.

The United States too was quick to issue a statement calling for immediate cessation of hostilities.

“As we have long made clear, there can be no military solution to the conflict,” U.S. Secretary of State Antony Blinken said. “We urge an end to any military hostilities immediately.”

It must be remembered that the Biden administration has recently greenlighted US military aid to Azerbaijan, despite Congressional efforts to block it based on aggressive acts from Baku which go back to 2020.

Azerbaijan is still attacking Armenia this morning, but as usual, it’d be impossible to identify the aggressor and responsible side from this toothless call to both sides to end hostilities.

And just remember: the US is still giving Azerbaijan military aid. https://t.co/n2fn9fWMzp

The #Azerbaijan‘i AF attempted to achieve positional advancement in several dir-s of 🇦🇲 -🇦🇿border.
It has shared footage showing 1of such attempts, drg w/the adversary approaches the Arm positions,crossing the border,&is forced to return to starting positions, sustaining losses. pic.twitter.com/YtBjPDZVE1

Charles Michel, president of the European Council, also reached out to Armenia, urging that Pashinyan take steps to resolve the conflict peacefully.

Meanwhile, Azerbaijan’s military says that it too has taken casualties, though without specifying figures, due to the “large-scale subversive acts” near the districts of Dashkesan, Kelbajar and Lachin on the border. It’s claiming that its troops “came under fire” first – “including from trench mortars” – according to the Reuters. “There are losses among (Azerbaijani) servicemen,” a statement said.