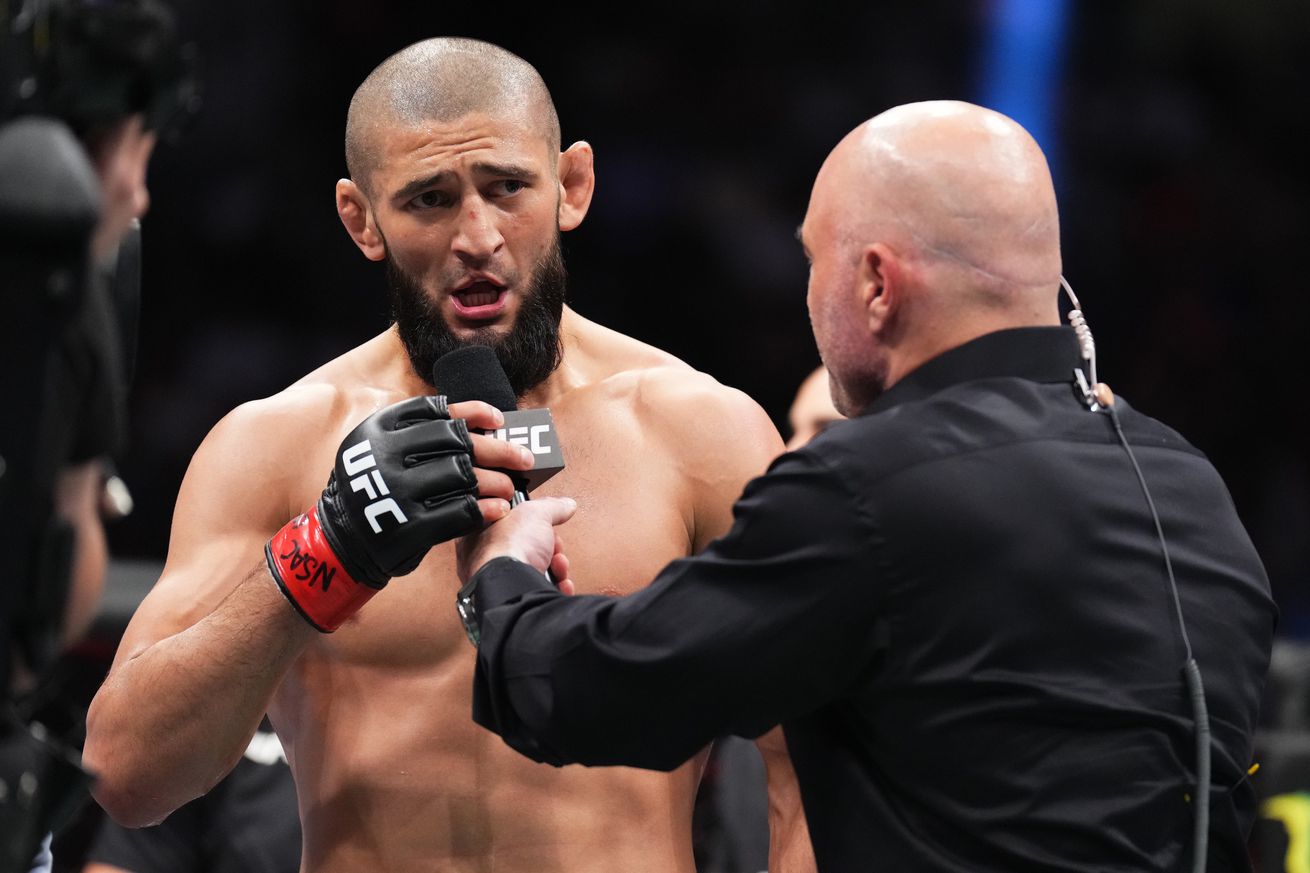 Welcome to the latest update to the MMA Fighting pound-for-pound rankings, where every month our esteemed panel sort through the noise to answer one question: Who are the best overall male and female MMA fighters in the world?

How did the past six weeks affect the global pound-for-pound landscape? Let’s take a look.

Welcome to the top 20, Khamzat Chimaev.

The Chechen destroyer was one of three new names to debut this month on the men’s pound-for-pound list. Now a perfect 12-0 in his career, Chimaev needed just two minutes to tear through Kevin Holland and reassert himself as a title contender after a bizarre week in Las Vegas that saw him miss weight by 7.5 pounds and kick off The Great Reshuffling™ of UFC 279. With blowouts in five of his six UFC wins, Chimaev’s destiny as a champion feels more inevitable than ever before. He lands at No. 20 on this month’s list.

As for our other two debutants, they don’t need much in terms of introductions: Leon Edwards, who authored a stunning upset of our previous No. 2 Kamaru Usman, and Demetrious Johnson, who exacted ferocious vengeance over our previous No. 20 Adriano Moraes. For their handiwork, Edwards rockets all the way to a well-earned No. 4 spot in his pound-for-pound debut, while the legend Johnson slides in at No. 13.

As for what’s next, all eyes will be squarely on Oct. 22, when the majesty of UFC 280 unfolds out in Abu Dhabi. Each of the event’s top three fights have major implications on the pound-for-pound ranks, but none more so than its main event: No. 3 Charles Oliveira vs. Islam Makhechev for the vacant UFC lightweight strap. Can’t wait.

Kayla Harrison is one victory away from capturing yet another $1 million payday.

The PFL standout was the lone woman on our list to compete since the last pound-for-pound update, smashing through Martina Jindrova in little more than three minutes. The win set up a third meeting with Larissa Pacheco for Harrison, who is now a perfect 15-0 in her MMA career. The two-time Olympic champion has already beaten Pacheco twice — both times in 2019, and both via unanimous decisions — so the odds will be in her favor when the pair collide once more on Nov. 25 for the PFL lightweight tournament finals.

Looking ahead, the next six weeks are a busy stretch for the bottom half of the women’s pound-for-pound ranks, as three fighters — No. 13 Katlyn Chookagian, No. 17 Seika Izawa, and No. 19 Mackenzie Dern — all look to defend their spots against unranked opposition. But that’s not all: No. 3 ranked Cris Cyborg is back in action as well.

The reigning Bellator featherweight champion is set to make her professional boxing debut on Sept. 25 against Simone da Silva in Brazil. Is Cyborg’s crossover to boxing a one-off or a sign of things to come in her decorated career? We shall see.

Lastly, a refresher on some ground rules:

The eight-person voting panel consists of MMA Fighting staffers Shaun Al-Shatti, Alexander K. Lee, Guilherme Cruz, Mike Heck, E. Casey Leydon, Steven Marrocco, Damon Martin and Jed Meshew.
Updates to the rankings will be completed following every UFC pay-per-view. Fighters will be removed from the rankings if they do not compete within 18 months of their most recent bout.

Should a fighter announce their retirement, our panel will decide whether that fighter should immediately be removed from the rankings or maintain their position until further notice (let’s put it this way: we’d have taken Khabib Nurmagomedov out of our rankings a lot quicker than the UFC did).

As a reminder, the notion of pound-for-pound supremacy is always going to inherently be subjective. When you’re debating whether someone like Stipe Miocic should be ranked above someone like Max Holloway, there is no true right answer. In other words: It’s not serious business, folks.

Thoughts? Questions? Concerns? Make your voice heard in the comments below.