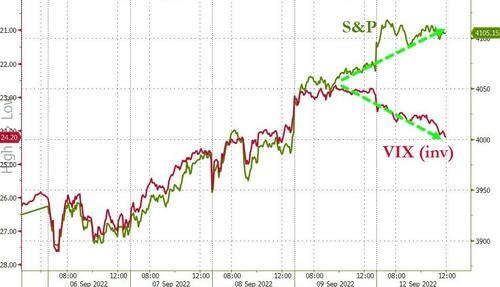 As we noted earlier, stocks squeezed higher for the 4th straight day, but VIX (unusually) rose today along with the equity indices (extending the decoupling we started to see on Friday)…

These are the tell-tale footprints of large levered-long bets being placed as options traders chase the market higher.

And, as Bloomberg reports, a number of large, bullish bets were flagged following last week’s reports from Goldman’s trading desk that they’d seen the largest notional long-buying in a year ahead of tomorrow’s CPI print.

There were “several examples of investors turning to upside calls for exposure to (or protection against) further momentum, both outright and versus downside put sales,” Christopher Jacobson, a strategist at Susquehanna Financial Group, wrote in a note.

“They could certainly be driven by investors who are underweight looking to these upside calls for limited-risk exposure.”

Susquehanna pointed out one trader that paid 53 cents each for 30,000 calls betting the iShares Russell 2000 ETF would rise to $199 by month-end. Another involved paying about $2.65 for roughly 15,000 calls linked to the SPDR S&P Biotech ETF (ticker XBI) with a strike price at $100 expiring in November.

Danny Kirsch, head of options at Piper Sandler, noticed a rather large derivatives trade coinciding with the initial rally.

Putting this altogether, we see the Put-Call ratio collapse today…

But as we noted, CTA flo-flops from short-to-long are the ammo needed for the next leg to squeeze higher from significant negative delta lows.

Just bear in mind one thing…